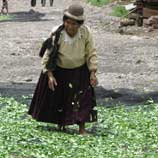 19 June 2009 -While Colombia reported a major decline in coca bush cultivation in 2008 - a decrease of 18 per cent compared to 2007 - Peru and the Plurinational State of Bolivia recorded increases of six per cent and 4.5 per cent, respectively. These statistics are reported in the coca bush cultivation surveys of the Andean countries released today by the United Nations Office on Drugs and Crime.

In addition to the decrease in coca bush cultivation in Colombia to 81,000 hectares, cocaine production in that country also fell by 28 per cent, from 600 metric tons in 2007 to 430 metric tons in 2008. These dramatic year-on-year reductions represent a return to the levels of coca bush cultivation reported from 2004 to 2006. In terms of potential cocaine production, the results for 2008 are the lowest reported for Colombia in a decade.

Much of the decline is due to the manual eradication of 96,115 hectares of coca bush (an increase of 44 per cent compared to the area eradicated manually in 2007) and the spraying of 133,496 hectares of coca bush in 2008. "This is a remarkable achievement," said UNODC Executive Director Antonio Maria Costa. "It means that more coca bush was eradicated in Colombia than was grown in all of Bolivia and Peru."

However, coca bush cultivation was up six per cent in Bolivia and 4.5 per cent in Peru. In Bolivia, potential cocaine production rose by nine per cent to 113 metric tons, while in Peru it was up 4.1 per cent, reaching 302 metric tons.

"The increases for Bolivia and Peru show a trend in the wrong direction," said Mr. Costa. "Since 2000, coca bush cultivation has decreased in Colombia, and has increased in Bolivia and Peru," he observed, warning that "Peru must guard against a return to the days when terrorists and insurgents, such as the Shining Path, profited from drugs and crime". 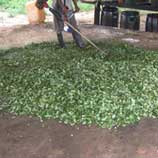 The farm-gate value of coca leaf in Colombia is falling, making coca bush cultivation less attractive for farmers. Indeed, 20,000 fewer households grew coca bush in 2008 than in 2007 (a decrease of 26 per cent). UNODC is supporting the efforts of the Governments of Colombia and Peru to help farmers develop licit livelihoods. "Much more development assistance is needed throughout the Andean countries, particularly in poor regions such as the Yungas of Bolivia, where coca is the only source of income," said Mr. Costa. He also warned that "drugs are destroying fragile ecosystems in national parks".

"Cocaine supply is shrinking, as is demand in major markets of North America, while cocaine use in Western Europe has stopped growing. This may explain why prices are up, and purity is down. This may also explain why cartels are becoming so violent," said the Executive Director.