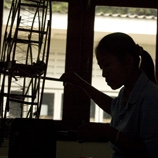 12 June 2009  - Not only are girls exposed to some of the worst forms of child labour, but they are also particularly vulnerable to human trafficking.

Today marks the World Day against Child Labour, which calls for action to tackle the worst forms of child labour, paying particular attention to the situation of girls. In a recent report issued by the International Labour Organization, an estimated 100 million girls are involved in child labour. On that account, the theme for this year is "Give girls a chance". According to information contained in the UNODC Global Report against Trafficking in Persons, 80 per cent of trafficked victims are women and children and half of all human trafficking victims are under the age of 18.

While much is being done to eradicate the worst forms of child labour, the current financial crisis threatens to erode this progress. Education, which is an essential part of the solution, is being threatened as cuts in national education budgets force families to choose which of their children stay in school. In cultures that place a high value on educating boys, girls risk being taken out of school and of starting work at an early age.

UNODC recently met with a representative from the United Nations Children's Fund (UNICEF) to discuss how education can help girls escape child labour and human trafficking.

Listen to the interview.