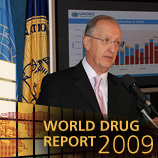 For the first time, UNODC presented the World Drug Report in a variety of media formats to cater to its wide audience. The digital media page, dedicated to the Report, presented a live webcast of the launch in Washington, D.C., including a question and answer session with the international journalists present. The page also presents video and audio podcasts of experts discussing the different drug themes presented in the Report. The page presents the executive summary of the report and the press release, which have been translated into the six official languages of the United Nations.

In addition to the traditional print copy, for the first time the digital media page presents the World Drug Report 2009 using flash technology.

Readers and online followers of UNODC via Twitter have sent numerous tweets in several languages, commenting on the World Drug Report and giving their own interpretation of what the findings mean for their respective countries.

This year's World Drug Report shows that global markets for cocaine, opiates and cannabis are steady or in decline, while the production and use of synthetic drugs are feared to be increasing in the developing world.

Speaking at the launch yesterday, Mr. Costa reported that news on synthetic drugs - amphetamines, methamphetamine and Ecstasy - is mixed. Use has levelled off in developed countries. In the developing world, there is concern that production and consumption may be growing, although the data are limited.

The head of UNODC highlighted shifts in the cocaine market. "Purity levels and seizures (in main consumer countries) are down, prices are up, and consumption patterns are in flux. This may help explain the gruesome upsurge of violence in countries like Mexico. In Central America, cartels are fighting for a shrinking market," he said. "Law enforcement has done wonders in terms of seizing cocaine - I pay tribute to them," said Mr. Costa.

The report pays special attention to the impact of drug-related crime and what to do about it. In the press conference, Mr. Kerlikowske said that "we should move away from divisive 'drug war' rhetoric". He underlined the importance of "breaking the cycle of addiction and crime".

The issue of drug legalization has received considerable attention in the press, not least in the build-up to the release of the World Drug Report 2009. Mr. Costa warned that legalizing drugs as a way of removing the threat posed by organized crime would be "an historic mistake". "Illicit drugs pose a danger to health. That's why drugs are, and must remain, controlled," says the head of UNODC in the preface to the Report. Societies should not have to choose between protecting public health and protecting public security; "They can and should do both". Mr. Kerlikowske told journalists at the National Press Club that "legalization is not is in the President's vocabulary, and not in mine either."

Both anti-drug czars underlined the need for more drug prevention and treatment. "We have to get people on the path to recovery," said Mr. Kerlikowske.