How does UNODC estimate opium cultivation and production figures? 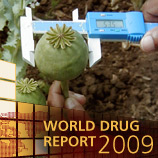 22 June 2009 - Illicit crop cultivation is often linked to insecurity, insurgency and lack of alternative livelihood options. It is important for Governments and the international community to know where opium poppy is cultivated and how much opium and heroin can be produced in order to understand and tackle the issue.

UNODC supports the Governments of Afghanistan, Myanmar and the Lao People's Democratic Republic in their efforts to estimate the area under opium poppy cultivation in their respective countries each year. In Afghanistan and Myanmar, this is done mainly by using high-resolution satellite images. Opium poppy plants, like other crops, reflect sunlight in a specific way.

Important information is provided by surveyors on the ground who map small portions of the area covered by the image and identify which crop is grown where. The growth stages of all crops and their exact locations are documented using photography and Global Positioning System (GPS) devices. This information serves as an interpretation template for the image. A second image taken after the opium harvest can help to resolve any remaining uncertainty. Farmers in Afghanistan, for example, plough poppy fields after the harvest but leave wheat fields for cattle to graze on the stubble; freshly ploughed poppy fields show clearly on the images as having a darker tone.

Hundreds of satellite images are taken every year over different areas of the three countries. This sample of images can be compared to a poll: if well designed, a poll enables analysts to understand the preferences of the population as a whole, even though only a sample of the population is interviewed. Similarly, a sample of satellite images representing the total agricultural area in a country can be used to calculate the area under opium poppy cultivation, based on the results of the image analysis.

In order to be able to estimate opium production, surveyors visit fields in several hundred villages and measure the number of poppy capsules and their size in sample plots. A scientific formula is used to calculate how much opium gum each plant can potentially yield, on the basis of the volume of the measured poppy capsule. In this way, the opium yield per hectare can be estimated. Yield can vary considerably from year to year and from region to region, depending on irrigation and climate conditions.

Opium yield and the total opium poppy cultivation area form the basis for estimating annual opium production. The bulk of the opium is used to produce morphine and heroin, a process carried out by so-called "chemists" or "cooks" who know which precursor chemicals are necessary and in what quantities. Information on the efficiency of this process is provided primarily by law enforcement agencies, which obtain detailed information from traffickers who have been apprehended. This information makes it possible to estimate potential heroin production.