Statistics highlight link between injecting drug use and HIV 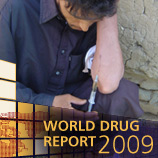 30 June 2009 - Injecting drug use is responsible for an increasing proportion of HIV infections in many parts of the world. It is estimated in the World Drug Report 2009 that between 11 and 21 million people worldwide inject drugs, and of those, between 0.8 and 6.6 million are infected with HIV.

HIV infection among people who inject drugs has been reported in 120 countries, and the prevalence of HIV among IDUs varies dramatically. Regions with the largest numbers and highest concentrations of HIV-positive IDUs include Eastern Europe, East and South-East Asia and Latin America. In those regions, the prevalence of HIV is higher than 40 per cent among many national and subnational injecting drug user populations.

Except for sub-Saharan Africa, IDUs account for a sizeable proportion of the total number of people living with HIV. In Eastern Europe and Central Asia, more than half of those living with HIV are IDUs.

This difference has been attributed to the geographic isolation of those two countries, as well as to their swift introduction of needle and syringe programmes and the expansion of opiate substitution treatment programmes after HIV infection was first documented in 1984.

The increase in the spread of HIV among IDUs calls for investment in comprehensive public health interventions.

UNODC is helping countries to review and develop laws, policies and standards of care that enable them to put in place effective services for IDUs. It also encourages greater proactive involvement of law enforcement agencies in HIV prevention and care and promotes collaboration among the health and criminal justice sectors and community-based and civil society organizations.

In addition, UNODC helps countries to expand evidence-informed drug dependence treatment services, particularly opioid maintenance therapy for IDUs, and to raise awareness among drug dependence treatment services regarding the need to address HIV prevention and care issues and to develop interventions to prevent the transition from non-injecting drug use to injecting drug use.

UNODC promotes services such as voluntary and confidential HIV counselling and testing, the treatment of sexually transmitted infections, the provision of antiretroviral therapy and interventions for specific sub-groups, including prisoners, sex workers who inject drugs and IDUs who may exchange sex for drugs or money.