The environment: individual choices are key to preservation 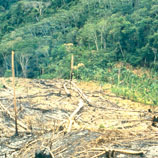 5 June 2009 - One gram of cocaine can destroy four square metres of forest. One hundred grams of cocaine contaminate 20 litres of water and generate 60 kilograms of waste. These startling facts clearly show the negative impact that our individual choices have on our environment. As the world marks World Environment Day today, it is also important to know that the trade in illicit drugs strengthens criminals and organized crime networks that damage the environment through their varied illegal activities.

Organized criminal groups traffic not just in drugs and people, but also in forest products, including timber and wildlife, minerals and precious stones, ozone-depleting substances and various types of hazardous waste that are then dumped without regard for the environment. These groups exploit failures in the criminal justice system, porous borders, inadequately enforced laws and weak penalties, while motivated by high profits from their illegal trade.

According to the Food and Agriculture Organization, South-East Asia is experiencing the fastest deforestation rate in the world, with Cambodia, Indonesia and the Philippines losing more than 2 per cent of their forest area annually while the world average is of 0.18 per cent. UNODC has created a partnership with the United Nations Environment Programme, TRAFFIC and the Freeland Foundation in order to strengthen national capacities to detect illicit trade in natural resources and ozone-depleting substances at national borders within the Greater Mekong subregion. Once implemented, this initiative will strengthen cross-border cooperation between existing liaison offices to tackle the illegal trade in timber, wildlife and hazardous waste in a systematic and effective way.

UNODC is also concerned with other crimes that generate environmental damage. Because of the land area needed for cultivation (in the case of plant-based drugs) and because of the harsh chemicals needed to produce drugs (in the case of both plant-based and synthetic drugs) illicit drug production is enormously damaging to the environment. Of particular concern is illicit cocaine production because it takes place close to some of Earth's most important and fragile ecosystems.

In Colombia, approximately 8,000 ha of national park area were destroyed due to coca cultivation in 2007 alone. In addition, soil and river systems have been contaminated by the harsh chemicals used in cocaine production and the air has been polluted by the smoke caused by the burning of jungle and forest for coca bush cultivation.

Recognizing the importance of this damage to the world, the Government of Colombia has been extremely proactive in dealing with environmental issues as a part of its overall drug control strategy.

In coca producing areas, the remote jungle, forest and national parks have proven to be attractive to organized crime. By overexploiting forest, wildlife and water resources, and by smuggling hazardous substances, criminal organizations jeopardize the stability of ecosystems and their ability to provide clean air, hydrological stability and food for future generations.

While all these efforts are being made at the international, regional and national levels to fight drug trafficking cartels and their destruction of the environment, it is also up to individuals to choose not to use illicit drugs and, by so doing, to help limit the damage to the environment caused by these criminal organizations by reducing the market for their products.

Earth Day: how stopping organized crime can help the environment

What does environmental crime have in common with organized crime?