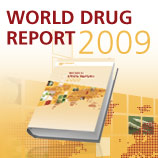 24 June 2009 - At 10 a.m. Washington D.C. local time (EDT) today, UNODC will release the 2009 edition of its flagship publication, the World Drug Report. UNODC Executive Director Antonio Maria Costa and newly appointed Director of the United States Office of National Drug Control Policy, Gil Kerlikowske, will release the Report and take questions from the press and through Twitter. A webcast of the press conference and all relevant materials can be found at http://live.unodc.org. Use #wdr2009 to pose a question via Twitter before 9 a.m. EDT.

This year, for the first time, the World Drug Report includes special sections on the quality of drug data available to UNODC, trends in drug use among young people and drug-related offences recorded by police. It also addresses the black market for drugs, one of the most formidable unintended consequences of drug control, and ways in which the international community can best tackle it.

Every year, the World Drug Report provides one of the most complete assessments of the international drug problem, with comprehensive information on the illicit drug situation. It provides detailed estimates and information on trends in the production, trafficking and use of opium/heroin, coca/cocaine, cannabis and amphetamine-type stimulants. The Report, based on data and estimates collected or prepared by Governments, UNODC and other international institutions, attempts to identify trends in the evolution of global illicit drug markets.

Through the World Drug Report, UNODC aims to enhance Member States' understanding of global illicit drug trends and increase their awareness of the need for the more systematic collection and reporting of data relating to illicit drugs.

The Report is being launched as run-up to World Drug Day on 26 June, and will be available on unodc.org.

Check the website for regular updates on the 2009 World Drug Report.