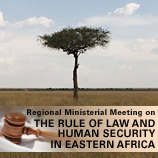 "In Eastern Africa, warning lights are flashing - we must respond immediately", warned UNODC Executive Director Antonio Maria Costa, speaking at the regional ministerial conference on "Promoting the Rule of Law and Human Security in Eastern Africa". He added that Eastern Africa is under threat from all sides: smuggling and piracy along its coast, trafficking through its airspace and across porous borders, and the spillover of threats from unstable neighbours.

This regional UNODC programme is based on three pillars: countering trafficking, organized crime and terrorism; fighting corruption and promoting justice and integrity; and improving health and human development. Such a comprehensive programme is urgently needed because Eastern Africa is vulnerable to drugs and crime due to conflict, poverty and a weak rule of law.

This vulnerability is being exploited by criminals who illegally import weapons, hazardous waste, counterfeit medicines and drugs, including 30-35 tons of heroin every year. Resources such as minerals, hardwood and endangered species are being smuggled out. Eastern Africa has also become a major source of migrants being smuggled into Europe.

This upsurge in criminal activity is a threat to health, security, development and justice. "Organized crime is preying on a region already suffering from so many tragedies and, as a result, is putting Eastern Africa in even greater danger", warned the head of UNODC.

To ameliorate this situation, the regional programme aims to achieve the folowing objectives: more data on drugs and crime in the region; increased capacity of Governments (against crime and corruption); criminal justice reform (including the creation of transnational organized crime units); greater regional cooperation (including intelligence-sharing); legal assistance (in implementing the United Nations conventions against organized crime and corruption); and greater access to drug and HIV treatment.