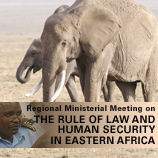 20 November 2009 - Eastern African countries are home to some of the most stunning flora and fauna and wildlife, which attract thousands of tourists yearly that in turn boost the economies of some of the poorest countries in the world.

Unfortunately, many of the protected species are disappearing rapidly, and more and more are entering endangered species lists, due in part to climate changes and rapid urbanization, but also, and more disturbingly due to an increasingly active illegal trade in flora and fauna, wildlife and pollution/dumping of toxic waste. Environmental crimes range from illegal logging from the sandalwood forests of Kenya, whose primary destination is Western Europe; rhino horns, elephant tusks and ivory products, which are sent to black markets across Asia, and poaching and cattle rustling across national borders.

Environmental crime in Eastern Africa is becoming increasingly organized and transnational in nature and can be seen, just as drug and firearms trafficking, as one of the most significant areas of trans-border criminal activity, threatening to disrupt societies in the region and hinder sustainable development.

Of still greater concern, many of these criminal activities are carried out by members of the local communities, who in turn link to national and international organized crime syndicates to move those goods overseas. National law enforcement is challenged to stop these crimes, as some local populations have been known to protect smugglers and traffickers.

History in the Eastern Africa region has shown that resource-based conflicts are easily triggered, especially where income levels are low, inequality is high, and borders are long and mutable. Although various legal frameworks and protocols have been adopted by a number of countries, one of the major impediments in the fight against environmental crime in the region, is the uneven adoption and implementation. This results in a situation where certain activities are criminal in one country and legal in the neighbouring one, giving organised groups almost carte blanche to pillage the region's most precious natural resources with impunity.

In the case of environmental crime, taking preventative action is essential. A forest destroyed takes four decades to replenish, and a species once extinct is lost forever.

UNODC Eastern Africa has organized a regional ministerial meeting with experts and Ministers from all thirteen countries in the region to discuss and endorse a new 2009-2012 programme that will address the transnational nature of this issue, amongst other human security issues.

The meeting will take place in Nairobi on 23-24 November, and will discuss other issues including corruption, terrorism, human trafficking, prison reform, piracy, HIV and AIDS and judicial reform throughout Eastern Africa.