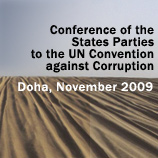 12 October 2009 - The third session of the Conference of the States Parties to the United Nations Convention against Corruption will take place from 9 to 13 November 2009 in Doha.

The Conference was established in accordance with article 63 of the United Nations Convention against Corruption, which was adopted in 2003 and entered into force in 2005. Its aim is to improve the capacity of and cooperation between States parties to achieve the objectives set forth in the Convention and to review its implementation.

Pursuant to decisions taken at the second session, the Conference is expected, at its third session, to concentrate on key issues such as review of the implementation of the Convention, asset recovery and technical assistance.

The Conference will also offer a unique opportunity for anti-corruption policymakers and practitioners to hold high-level consultations on preventing corruption, criminalization and international cooperation.

A number of special events will take place to showcase initiatives and good practices that contribute to the fight against corruption.

More than 1,000 participants are expected to attend the event, representing Governments, regional and intergovernmental organizations, civil society, the private sector and the media.

This third session of the Conference will be preceded by the sixth Global Forum on Fighting Corruption and Safeguarding Integrity (Doha, 7-8 November 2009), which the Government of Qatar will be hosting.

The Conference held its first session in Jordan, in 2006, and its second session in Indonesia, in 2008.