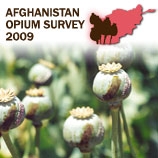 2 September 2009 - Opium poppy cultivation in Afghanistan is down 22 per cent, opium production is down 10 per cent, while prices are at a 10-year low. The number of opium poppy-free provinces has increased from 18 to 20 out of a total number of 34, and more drugs are being seized as a result of more robust counter-narcotics operations by Afghan and NATO forces.

These are the findings contained in the summary findings of the Afghan Opium Survey 2009, released in Kabul today by UNODC Executive Director Antonio Maria Costa. This annual survey covers the planting cycle from May 2008 to June 2009.

"At a time of pessimism about the situation in Afghanistan, these results are a welcome piece of good news and demonstrate that progress is possible", said Mr. Costa.

Opium poppy cultivation has fallen to 123,000 hectares, down from a peak of 193,000 hectares in 2007. This year, the most significant decrease was recorded in Helmand Province, where cultivation declined by a third to 69,833 hectares from 103,590 hectares in 2008. The dramatic turnaround in one of Afghanistan's most unstable provinces can be attributed to an effective mix of sticks and carrots: strong leadership by the governor; a more aggressive counter-narcotics offensive; terms of trade that are more favourable to legal crops; and the successful introduction of "food zones" to promote licit farming.

Opium production in Afghanistan, although falling 10 per cent to 6,900 tons from last year, has not fallen as dramatically as cultivation because farmers are extracting more opium per bulb. This year, Afghan poppies yielded 56 kg of opium per hectare, which is a 15 per cent increase over 2008 and five times more than farmers yield in the opium poppy growing countries in South-East Asia (who yield 10 kg/ha).

World demand for opium remains stable (at around 5,000 tons), which is several thousand tons lower than is produced in Afghanistan every year. Yet, prices are not crashing, which suggests that a large amount of opium is being withheld from the market. "Stockpiles of illicit opium now probably exceed 10,000 tons - enough to satisfy two years of world (heroin) addiction, or three years of medical (morphine) prescription", says Mr. Costa. "Where is it, who is hoarding it and why? Intelligence agencies should defuse the ticking-bomb of opium stockpiles before these become the source of potential sinister scenarios", warned Mr. Costa.

Oversupply at the source in Afghanistan and lower market penetration in Europe are pushing opium prices down. Farm-gate prices have fallen by a third in the past year: from $70/kg to $48/kg for fresh opium and from $95/kg to $64/kg for the dry variety. In Afghanistan, opium values have not been this low since the late 1990s, when the Taliban were in power.

This year, opium farmers saw their (gross) earnings per hectare shrink by one quarter, to $3,562/ha down from $4,662/ha in 2008. Falling prices and lower cultivation this year caused a 40 per cent collapse in the total farm-gate value of opium production in Afghanistan, which is valued at $438 million. This is equivalent to 4 per cent of the country's gross domestic product, down from 12 per cent in 2007, and an unprecedented 27 per cent in 2002. This year, 800,000 fewer people are involved in opium production compared with 2008.

Afghan and NATO forces are now compounding the pressure caused by market forces.

"The link between drugs and insurgency, now recognized, is being attacked militarily", said Mr. Costa.

Until recently, interdiction had been largely ineffective. Although 90 per cent of the world's opium comes from Afghanistan, less than 2 per cent is seized there (by comparison, more than 20 per cent of global cocaine supply is seized by its main producer, Colombia). Lately, counter-narcotics operations have become more frequent and more robust. In the first half of 2009, military operations destroyed over 90 tons of chemicals used in the production of illicit drugs, 450 tons of opium poppy seeds, 50 tons of opium, 7 tons of morphine, 1.5 tons of heroin, 19 tons of hashish and 27 laboratories.

"While this has knocked out only a fraction of the Afghan drug economy, it has increased the risks of drug trafficking and is creating a deterrent for the future", said the head of UNODC.

According to Mr. Costa, "eradication continues to be a failure". Over the past two years, only 10,000 hectares of opium (less than 4 per cent of the amount planted) were eradicated, at enormous human and economic costs. Mr. Costa called for greater support for farmers. "In post-election Afghanistan, the rural development push must be as robust as the current military offensive - to feed and employ farmers, not just to search and destroy their drugs", he said.

Despite recent progress, drugs originating in Afghanistan still have catastrophic consequences. They fund the activities of criminals, insurgents and terrorists in Afghanistan and elsewhere. Collusion with corrupt government officials is undermining public trust, security and the rule of law. Widespread money-laundering is harming the reputation of banks in the Gulf and farther afield. Addiction to opiates is a big problem not only in Afghanistan, but also in the Islamic Republic of Iran, the Russian Federation and throughout Central Asia.

"A marriage of convenience between insurgents and criminal groups is spawning narco-cartels in Afghanistan linked to the Taliban", warned Mr. Costa. As in other parts of the world like Colombia and Myanmar, the drug trade in Afghanistan has gone from being a funding source for insurgency to becoming an end in itself. "Drug money is addictive, and is starting to trump ideology", said Mr. Costa.

The UNODC Executive Director repeated his call for drug traffickers connected to terrorism to be reported to the Security Council (in line with its resolution 1735). "Drug lords should be brought to justice - not executed in violation of international law or pardoned for political expediency".

Call for regional cooperation and a scaling up of effort

The head of UNODC underlined the need for a regional approach to tackle the threat posed by Afghan opium. "The focus on Afghanistan and Pakistan is welcome, but we need to widen the scope to Iran and Central Asia as well", said Mr. Costa. That is why UNODC has brokered a trilateral initiative among authorities in Afghanistan, Iran (Islamic Republic of) and Pakistan to share counter-narcotics intelligence and run joint operations. UNODC has also established the Central Asian Regional Information and Coordination Centre, which is headquartered in Almaty, Kazakhstan.

Mr. Costa cautioned that "controlling drugs in Afghanistan will not solve all of the country's problems, but the country's problems cannot be solved without controlling drugs". He added that "it is too early to tell if the decrease in opium cultivation and production over the past two years is a market correction that could be reversed or a downward trend". He stressed the need for increased security in order to achieve further progress. "Like never before, the fates of counter-narcotics and counter-insurgency are inextricably linked", he said.

The head of UNODC urged the Afghan authorities and the international community to stay the course and to scale up targeted economic and counter-narcotics assistance. "It would be an historical error to allow this undeniable progress to be undermined not in the opium fields of poor farmers, but in the killing fields of suicide bombers", said Mr. Costa.

The summary findings of the Afghan Opium Survey 2009 are now available online.

Over the next few months, UNODC will also be issuing: