Speaking the language of sport 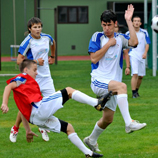 1 September 2009 - More than 100 girls and boys aged 14-17 came together in late July at the Olympic Training Centre in Spała, Poland, for a one-week camp to play sports and learn social skills. While coming from various linguistic backgrounds, the participants spoke one language: the language of sports.

The participants mingled, exchanged ideas, discussed their cultures and played together. They were brought together by the Global Sport Fund, a global partnership initiative between UNODC and the Qatar Olympic Committee that uses sports to engage youth and keep them busy so that they stay away from drugs and delinquency.

The initiative uses organized sports to help young people to learn social skills that can have a positive impact on their behaviour and decision-making abilities. During the week-long summer camp, topics such as fair play, teamwork, leadership and drug prevention awareness were on the agenda.

At the camp, participants spent time attending interactive seminars, participating in football and handball competitions, sightseeing and having fun. They also had the opportunity to meet and interact with four-time Olympic gold medallist in walking Robert Korzenioski and Beijing Olympics gold medallist in shot put Tomasz Majewski.

"In an environment where many languages are spoken, sport is a medium that breaks down language barriers," says Carl Marsh, the Global Sport Fund's Project Coordinator. "If you keep youth busy, they can use their spare time more productively to improve themselves", he adds. 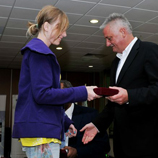 The Ministry of Sport and Tourism of Poland hosted the event, ensuring that the young participants and their coaches had the best sports facilities and transportation. Participants came from Albania, Belarus, Bosnia and Herzegovina, Bulgaria, Greece, Hungary, Kosovo, Montenegro, Poland, Qatar, Slovenia, the former Yugoslav Republic of Macedonia and Ukraine.

Christos Kontemiris, a participant from Greece, said, "I learned to play fairly and met many great people. I will keep in touch with them."

The Qatar Olympic Committee sponsored the event by providing logistical support for the camp and by sending invitations to the national olympic committees of the countries represented, as well as to non-governmental organizations.

At the end of the week-long camp, 109 GSF Youth Ambassadors and 28 GSF Coach Ambassadors were awarded medals and certificates. The organizers encouraged participants to go back to their respective schools and share what they had learned with their peers.

Staff from the Global Sport Fund will remain in touch with the participants and sponsoring organizations to provide technical advice and, where appropriate, support sporting initiatives that involve youth, such as afterschool sports programmes. In addition, outstanding community service initiatives will be recognized.