Women  hold up half the sky 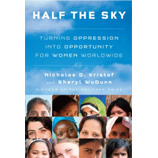 16 September 2009 - Secretary General Ban Ki-moon has called for action to protect women against abuse and discrimination.

Secretary-General Ban made the remarks yesterday in New York at a panel discussion and book signing ceremony for Half the Sky: Turning Oppression into Opportunity for Women Worldwide, a book by Pulitzer Prize winners Nicholas Kristof and Sheryl WuDunn.

"Violence against women stands against everything in the United Nations Charter. Whichever form it takes, it is an abomination. Human trafficking, sex slavery, domestic violence, institutionalized discrimination - all of these must end. So must the silence that is so prevalent and that serves only to shield the perpetrators and perpetuate their crimes," said Secretary-General Ban.

He added, "we are striving to improve maternal health and to better protect women and children during times of conflict. And we are committed to engaging men, for we will never fully empower women without changing attitudes and stereotypes".

In the book, Kristof and WuDunn plead for a worldwide grassroots movement in support of the women of the world, their education, health (with a strong emphasis on reproductive health), economic and political empowerment, and human rights.

Stories of women overcoming appalling circumstances such as violence and degradation of sex trafficking, sexual enslavement and rape to change their world constitute the core of the book.

UNODC Executive Director Antonio Maria Costa said, "Sexist attitudes lead to sexual exploitation. Whether it's burkas or bikinis, the portrayal and treatment of women as either property or sex objects is an affront to human dignity and creates both the supply and demand of women and girls who are traded like commodities. But changing laws and business practices is not enough. We must change attitudes".

UNODC is the lead United Nations agency fighting all forms of human trafficking. UNODC works with Governments, the private sector, and non-governmental organizations to combat human trafficking by raising public awareness, engaging in preventive activities and enhancing the capacity and skills of criminal justice professionals and policymakers.