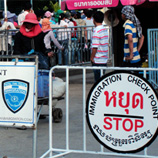 13 August 2010 - The growing volume of trade between Cambodia and its neighbouring countries means that Cambodian border officers, often operating with poor facilities, insufficient specialized knowledge and limited budget, are requested to carry out timely and effective controls on increasing human and vehicle traffic.

Criminal networks take advantage of these loopholes at the borders to smuggle migrants and to traffic in drugs, wildlife, forest products and hazardous waste, as well as human beings. Threatened by a systematic lack of capacity, border areas also provide an opportunity for criminals to launder the proceeds of their illicit activities.

In order to strengthen Cambodia's capacity to counter transnational trafficking, UNODC, in cooperation with the National Authority for Combating Drugs, recently supplied a border liaison office in Preah Vihear province with equipment including communication devices, vehicles and computers.

"UNODC is happy to assist in an expansion of the border liaison office mandate to threats posed by transnational organized crime such as wildlife trafficking and the smuggling of migrants", said Mr. Lermet.

The new equipment will strengthen the capacity of the border liaison office in Preah Vihear province. It will also allow for improved and direct communication with other border liaison offices, which will in turn foster greater cooperation between Cambodia and the Lao People's Democratic Republic.

The supply of equipment is part of a UNODC project in the region that was developed in cooperation with six countries of the Greater Mekong subregion to encourage cooperation between law enforcement units working at national borders.