Corruption: Making your NO count the world over 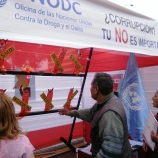 23 December 2010 - Corruption is a global crime, a scourge which knows no barriers and one which affects nearly ever facet of life. It is also one which, through collaborative, international awareness raising and action can be beaten. Since it's inception in 2003, this is what the annually recognized International Anti-Corruption Day has set out to achieve all around the world - events, roundtable discussions, marches, and campaigns have been organized between Governments, civil society groups, private individuals and UNODC in a bid to highlight the dangers behind corruption and expose what was once only discussed in hushed tones. Under the current theme "Corruption: Your NO Counts", UNODC, as the guardian of the UN Convention against Corruption, encourages each and every person to speak out against and reject corruption in all its forms. Amongst the ever-growing support that the international day and the campaign receives, UNODC Field Offices across the world added local twists to this international campaign through an array of media activities, electronic outreach and educational and informative events.

In Nigeria UNODC joined up with campaign partners UNDP and the Inter-Agency Task Team on Anti-Corruption to hold a 2 day programme, which included a march held by members of the public and private sectors in a sign of solidarity in the fight against corruption. This was followed by a conference in Abuja attended by several key stakeholders, including Nigeria's Attorney General and Minister of Justice Mohammed Bello Adoke who emphasized the importance of the country's present draft National Anti-Corruption Strategy.

For the second year running UNODC's office in Peru set up an exhibition entitled "Peru without Corruption". Organized with the Presidency of the Council of Ministers, the exhibition brought together various anti-corruption actors including the Minister of Labour and Employment Promotion, Manuela García, and the country's Minister of Interior, Miguel Hidalgo. The exhibition recognized public agencies who have implemented innovative practices in the promotion of ethics and combating corruption over the past year, and encouraged members of the public to physically "bring down" corruption through a funfair-style throwing game aimed at eliminating corruption's related social-ills of bribery, mistrust, poverty, and deception.

In Belgrade, the UNODC South Eastern Europe office joined with the Serbian Anti-Corruption Agency in celebrating the international day, an event which was opened by Serbian President Boris Tadic, and attended by governmental and NGO representatives, international organizations, and members of the diplomatic community. The event was preceded by a 2-day workshop for Government experts participating in the Review Mechanism for the UN Convention against Corruption - a critical tool in ensuring countries are equipped to fight this crime.

The Southern African Regional Office held a roundtable discussion on 9 December with the Public Service Commission and the National Anti-Corruption Forum in South Africa. The event, which was attended by over 160 people from across Government departments, business and the general public, brought together speakers and key players from the public, private and civil society sectors, including the Minister of Public Service and Administration Richard Baloyi who spoke about the need to adopt a stronger culture of accountability amongst civil servants.

Lastly in Vietnam UNODC, alongside UNDP and the Government Inspectorate of Vietnam, organized a series of outreach activities to mark anti-corruption day. These included radio broadcasts and television transmissions around the damaging impact of corruption. The day was also marked with an event looking at the UN Convention against Corruption which was ratified by Vietnam in June 2009.