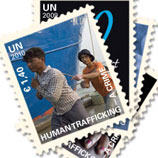 4 February 2010 - The United Nations Postal Administration (UNPA) has issued new stamps based on the human trafficking theme. The stamps are on sale from 5 February, and are available online, as well as at the UNPA offices in Geneva, New York and Vienna.

Human trafficking affects every country in the world, whether as a country of origin, transit or destination for victims. It is estimated that 2.4 million people are lured into forced labour as a result of human trafficking at any given time. Women and girls account for about 80 per cent of the detected victims, and child trafficking accounts for between 15 and 20 per cent of the total. The challenge for all countries, rich and poor, is to target the criminals who exploit desperate people and to protect and assist victims of trafficking and smuggled migrants, many of whom endure unimaginable hardships in their bid for a better life.

The Blue Heart Campaign is part of the UNODC anti-human trafficking programme. As guardian of the United Nations Convention against Transnational Organized Crime and the Protocols thereto, UNODC assists States in their efforts to implement the Trafficking in Persons Protocol.

The United Nations Global Initiative to Fight Human Trafficking (UN.GIFT) was launched in March 2007 to promote the global fight on human trafficking, on the basis of international agreements reached at the United Nations. UN.GIFT works with governments, business, academia, civil society and the media to create new partnerships and develop effective tools to fight human trafficking.