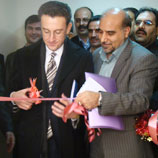 9 February 2010 - In a major step towards countering money-laundering, the Government of the Islamic Republic of Iran has teamed up with UNODC to set up a financial intelligence unit that will analyse suspicious financial transactions with a view to curbing such crime.

The unit will collaborate with the Judiciary in investigating suspicious transactions and in prosecuting offenders. Furthermore, it will play an important role at the international level by interacting with similar units from other countries.

Iranian Vice-Minister of Economy and Finance Affairs, Dr. Asghar Abol Hassani, who attended the inauguration of the unit, said "the establishment of the Financial Intelligence Unit in the Islamic Republic of Iran is another demonstration of our country's lead in the fight against drugs and crime in the region. We are grateful to UNODC for its assistance and joint work."

The new unit, set up with the technical assistance of UNODC, is currently made up of 15 officials from the Ministry of Economic Affairs and Finance. The number of officials is expected to increase in the near future as the unit steps up operational activities.

In his remarks, UNODC Representative in the country Antonino De Leo, said that the "time has come to celebrate progress on anti-money-laundering by the Islamic Republic of Iran. UNODC is proud of having contributed to these national achievements through its technical assistance programme." Mr. De Leo added that UNODC technical activities in the Islamic Republic of Iran would have not been possible without the financial contribution of the Governments of Germany, Italy and the United Kingdom.

The huge amount of illegal money earned by criminal organizations dealing with drugs, and the consequent laundering of those proceeds has been a matter of concern for the Iranian Government for many years. Emphasizing the gravity of the situation, Mr. De Leo noted that most of the opiates originating in Afghanistan are trafficked across Iranian and Pakistani borders. In a 2009 report, UNODC estimated that trafficking in opiates from Afghanistan has created an illegal market worth $65 billion annually, more than the gross domestic product of more than 120 countries and 65 times the value of the market for firearms trafficking.

UNODC has also assisted the Islamic Republic of Iran in establishing an anti-money laundering computer-based training centre in Tehran. This centre, originally set up in September 2009 together with the Ministry of Economic Affairs and Finance, is "a centre of excellence to train officials on international best practices in tackling money-laundering and financing of terrorism," Mr. De Leo explained.

UNODC is also planning to support the Iranian Government's efforts to improve its national legal framework; to provide opportunities for on-the-job training, seminars and study missions to the Finance Intelligence Unit's officials; to support coordination between the Judiciary, Customs and concerned law enforcement institutions; and to facilitate international relations with foreign Financial Intelligence Units, the Financial Action Task Force on Money Laundering and the Egmont Group.