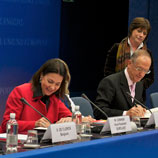 26 February 2010 - Today, UNODC and Eurojust (a European judicial cooperation body created to help provide safety within an area of freedom, security and justice) signed an agreement to improve judicial cooperation and intensify the fight against crime, particularly serious crime.

The memorandum of understanding demonstrates the commitment of Eurojust and UNODC to enhance cooperation, and represents a further step in global cooperation in the fight against serious forms of transnational crime.

"To confront transnational threats, States must work together across borders to share intelligence and provide mutual legal assistance. The Eurojust experience could be replicated in so many other theatres around the world," said UNODC Executive Director Antonio Maria Costa at the signing ceremony in the presence of Michèle Coninsx, Vice-President and Acting President of Eurojust.

The memorandum will allow both organizations to exchange legal information and best practices, knowledge and experience. It will also provide a basis for joint efforts in training and seminars, and participation in each other's meetings, where appropriate.

UNODC will grant national members of Eurojust access to its legal tools, including its databases on treaty-related information. Eurojust will, upon request by UNODC and on a case-by-case basis, examine whether information from Eurojust can be transmitted to UNODC. 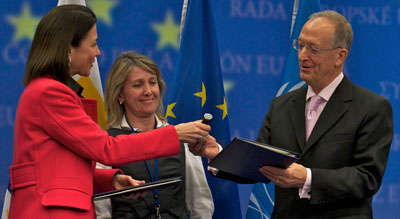 Eurojust was set up by the Council of the European Union in February 2002 to improve the fight against serious crime by facilitating the optimal coordination of action for investigations and prosecutions covering the territory of more than one member State with full respect for fundamental rights and freedoms.

Eurojust is composed of 27 National Members, one from each State member of the European Union. They include senior and experienced judges and prosecutors, or police officers of equivalent competence, who together form the College of Eurojust.