Lao families rise out of poverty and opium addiction to prosperity 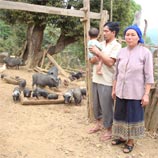 6 January 2010 - Chanthone Soutvatdi is 45 years old and married with three children. She is also the head of the savings and credit group of Nasala village, in the Houaphan province of the Lao People's Democratic Republic. Chanthone weaves and sells Lao skirts, making a handsome profit of 2.3 million kip over a period of one and a half months.

Chanthone has been the head of the savings and credit group since 2002. The group was started with support from UNODC, which contributed part of the start-up funds. Seven years down the line, membership has more than quadrupled and the loans base grown from an initial 50 million kip to nearly 200 million kip, 31 million of which is interest earned from members' loans. Group members get loans to start and operate weaving businesses, raise livestock and trade. High market demand for these good quality products both in the country and abroad has assured villagers a steady market. Recently, Chanthone's village, Nasala, was declared poverty free according to the Houaphan province poverty criteria.

Manivanh, another beneficiary, comes from the neighbouring village of Houaisat. Her parents used to grow opium poppy, on which they depended to feed the family. Manivanh and her husband decided to start alternative income generating activities instead of cultivating opium poppy. They weave and sell Lao skirts, and raise pigs and chickens. In 2008, the family made 8 million kip from these activities.

"The income from these three  sources helped my family get out of poverty," she explains. "I have more money than in the past and can now buy the things that the family needs." Manivanh's family is a model family in the village. Her activities continue to be the source of a stable income, significantly improving her family's living standards.

Manivanh hopes to learn more about animal feeding and methods to prevent loss of her livestock due to disease. She also wants to produce animal feed utilizing local resources. In January last year, Manivanh's village (Houaisat) attained the status of a Culture Village of Houaphan province. The village achieved the model status because of its strong leadership, reliable market access and good cooperation among the villagers.

The UNODC alternative development project in Houaphan province has been designed to help local communities tackle poverty through home-grown solutions and ownership of interventions, as part of larger efforts to achieve the Millennium Development Goals. The project, running from 2007 to 2010, provides assistance to opium planting communities to promote alternative sustainable livelihoods, village based organizations, drug demand reduction, village savings and credit groups, and improvement of community infrastructure.

Implementation is closely coordinated with the Asian Development Bank, which is helping to improve essential community infrastructure, which will in turn contribute to the goals of the National Growth and Poverty Eradication Strategy within the target villages.

In addition to the two case studies highlighted above, UNODC has also overseen the successful treatment and rehabilitation of 80 opium addicts, established 31 village development committees with over 120 members, established 15 village savings credit groups with nearly 700 members and 80 million kips' worth of savings, and sponsored four pig breeding facilities. The project is funded by the Government of Luxembourg and the Government of the United States of America.