AIDS conference to open in Vienna 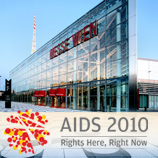 16 July 2010 - More than 20,000 people working in the field of HIV - including policymakers, legislators and researchers - and people living with HIV from 190 countries will converge in Vienna this week for the XVIII International AIDS Conference to be held from 18 to 23 July. The theme for this year's conference is Rights Here, Right Now, which emphasizes the central importance of human rights in responding to HIV.

Among the high-profile participants at the Conference will be Annie Lennox, Bill Clinton, Bill Gates, President of Austria Heinz Fischer and Crown Princess of Norway HRH Mette-Marit.

By holding the Conference in Vienna, the organizers will highlight the situation in Eastern Europe and Central Asia, regions that are experiencing a rapidly growing epidemic largely as a result of unsafe drug use by injection. An estimated 1.5 million people are living with HIV in those regions, a significant majority of these are people who use drugs. The sharing of needles and injection equipment is thought to be three times more likely to transmit HIV than sexual intercourse.

At the Conference, participants will also examine worldwide progress towards the 2010 deadline set by world leaders under the Millennium Development Goals for achieving universal access to services for HIV prevention and treatment.

The United Nations, through the Joint United Nations Programme on HIV/AIDS (UNAIDS) and UNODC, is supporting the AIDS 2010 conference. UNODC is the lead agency within UNAIDS for HIV prevention and treatment, care and support for injecting drug users, including in prison settings. It works in 55 priority countries in Africa, Eastern Europe, Central Asia, South and South-East Asia and Latin America and the Caribbean, helping countries to provide drug users, prisoners and people vulnerable to human trafficking with comprehensive evidence-informed HIV services.

"We can and must reverse the HIV epidemic, first of all by preventing the spread of drug use, and then by providing treatment to drug dependent people. In this comprehensive programme, HIV-targeted measures include providing clean injecting equipment, opioid substitution and antiretroviral therapy," said UNODC Executive Director Antonio Maria Costa.

At the Conference, UNODC will launch the discussion paper "From coercion to cohesion: Treating drug dependence through health care, not punishment" . The paper will be released in conjunction with the relaunch of the Open Society Institute (OSI) 2010 report "Detention as treatment: Detention of methamphetamine users in Cambodia, Laos and Thailand" and is aimed at highlighting the issues surrounding detention centres and compulsory treatment for drug users.

Apart from this, UNODC is also organizing many formal and side events relevant to its HIV work. The Global Village, which forms part of the Conference, will be open to the general public and conference delegates and will enable groups from all over the world to meet, share and learn from each other.

Facts about drug use and the spread of HIV