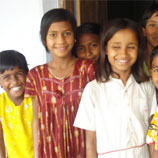 7 June 2010 - Six days a week, 10-year-old Anima treks the one kilometre to the only primary school in her village, in the border area of Bangladesh. She walks barefoot with a torn satchel slung over her shoulders. Her father breaks stones in a nearby quarry while her mother works in the paddies. These days, her 5-year-old sister accompanies her as well. Braving the scorching heat,  stone-filled roads and dust, they reach their school. The classroom is tiny and there are only two windows, an old table, a chair and a makeshift blackboard. Around 100 eager children aged between 5 and 12 attend class in this one room. Attending school may be an ordinary scene in urban cities, but in this remote village, it is a remarkable feat.

The children sit on the floor, books open on laps, and listen to the senior headmaster, who is from Kolkata, India. He dedicates all his time to helping the children to stay in school and complete their education and, most importantly, to talk to them about human trafficking, why it occurs, its cause, who are the potential victims and how to take preventive steps.

The headmaster explains that "there have been several reported cases in this village, where girls as young as 5 years old have been trafficked or sold by families. They become victims of sexual and labour exploitation in West Bengal. Approximately 7,000 girls and women are trafficked from Bangladesh to West Bengal annually. If we are to stop this crime, we have to teach them about human trafficking from the earliest age so that they do not become victims".

Anima is the head girl of the class. Standing tall in front of her classmates, she urges them to recite in chorus a short poem in the local language. The poem centres around the heinous crime of human trafficking and how children are vulnerable but not helpless to act. In addition, Anima explains to the class that "we should refuse to speak to strangers, especially men. If he offers us sweets and lures us with tales of a good life, we should report this to our elders or the police. Traffickers lure children like us. We are sold to brothels, sexually exploited and abused. We are forced to work in houses and factories with no food and no money. This is not what we want. We want to be educated and aware." The room fills up with claps.

"The children are always the best teachers," adds the headmaster. He believes they are in a good position to help spread information on these issues and raise awareness among the whole community. Such initiatives, where life-saving messages are built into the education curriculum, help children grow safely and wisely in a world fraught with danger.

UNODC and Action against Trafficking and Sexual Exploitation of Children India, a network of non-governmental organizations working to prevent human trafficking, support this initiative under the UNODC project on prevention of human trafficking, with contribution from the United States Agency for International Development.

Human trafficking in South Asia is often referred to as one of the fastest growing transnational organized crimes. Over 150,000 people are trafficked in the region every year for sex work, labour, forced marriages and organ trade. Countries in South Asia, including Bangladesh, serve as prominent origin, transit and destination countries for women, children and men being trafficked. In South Asia, the largest numbers of women trafficked are within or from the region, and child trafficking is a major concern. With a rise in demand for domestic help in the cities, families from rural villagers often willingly turn their children over to middlemen who promise a better life in the cities.

In addition to supporting local initiatives by non-governmental organizations, UNODC also provides technical assistance and financial assistance to projects aimed at  preventing and prosecuting human trafficking in the region.