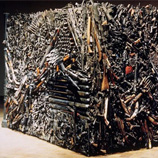 4 June 2010 - A five-ton work of art made entirely of decommissioned weapons such as handguns, ammunition and landmines is on display at the Vienna International Centre this week. The Gun Sculpture was developed by Canadian artists Sandra Bromley and Wallis Kendal as a comment on the culture of violence engulfing many modern societies.

The Gun Sculpture is part of an exhibition called The Art of Peacemaking which includes a mural showing photographs of victims of war and various forms of violence around the world and a blackboard and book where visitors can comment on the exhibition. According to artists Bromley and Kendal, the sculpture is meant to challenge but not shock visitors intellectually and emotionally, to bring insight into the nature of violence. The weapons are a metaphor for the violence of the twentieth-century, which many argue was the most violent century in human history.

The 7,000 or so deactivated weapons that make up the Gun Sculpture were collected from around the world and each one is connected in some way to a violent act. Every piece has been individually altered so that it will never function again. The items were welded in place, partly using aircraft assembly technology. None of these weapons can be removed or fired, and the structure is stable.

UNODC figures show that the market for illicit arms is estimated globally at US$ 200-300 million per year, which is about 20 per cent of the (licit and measurable) arms trade. Africa, the arms smugglers' most profitable market, suffers the largest number of casualties because of it. 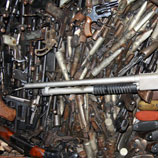 To date, only 79 Members States are parties to the Protocol against the Illicit Manufacturing of and Trafficking in Firearms, Their Parts and Ammunition, which entered into force in July 2005. The Protocol supplements the United Nations Convention against Transnational Organized Crime (Palermo Convention), the main international instrument in the fight against transnational organized crime. Parties to the Protocol are required to adopt legislation to prevent guns from falling into the wrong hands; criminalize the removal of the markings on guns; keep the records necessary to trace them; prevent the re-activation of disabled guns; promote cooperative regimes to monitor gun flows; prevent weapons theft; and build law enforcement capacity across borders.

The fifth session of the Conference of the Parties to the United Nations Convention against Transnational Organized Crime and its Protocols will take place in Vienna from 18 to 22 October 2010. ( View information on past sessions).