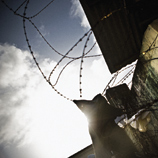 10 June 2010 - It is everyone's worst nightmare: getting arrested and being put in prison for a murder you did not commit. That is exactly what happened to 28-year-old Pastino Lubang of Juba, Southern Sudan. After 18 months' incarceration, he was finally pronounced innocent and released from prison. This is his story.

In December 2007, Pastino's sister was abducted. His family suspected that a certain young man was involved, so Pastino and several relatives went to talk to the young man's family. The discussion became heated and blows were exchanged. Pastino intervened and broke up the fight and his family went home.

Then the police arrived. A member of the other family had been hospitalized with serious injuries. "They arrested 13 members of my family and took us to jail," Pastino says. "After eight days, the person in the hospital died and we were all charged with murder." After an initial screening, eight of Pastino's relatives were released, but he was among the five who were sent to Juba prison, "even though most of us had nothing to do with what happened." It was not until June 2009 that two of Pastino's relatives were convicted of murder and he and the others were released.

In police custody "detention conditions and treatment were very, very bad," Pastino says, whereas in prison "we were treated well and we did not face corporal punishment or beatings. There were some conflicts among prisoners because there were no guards inside the prison, but beside that we were fine." But physical conditions were abysmal: the prison lacked sanitation and bedding, and even food and water were in short supply.

Today Pastino works as an electrician at Juba prison and says that conditions for prisoners have gradually improved. Before his incarceration, he was unemployed for many years, so he is glad to have the job, but he wants more training. "I have only one hope," he says, "to get out of poverty so that I can better take care of my family."

Pastino's experience is not unusual. Southern Sudan's criminal justice system has been all but destroyed by two decades of civil war. The legal framework and prison policies still require extensive reform, and both prison administrators and prisoners need a better understanding of the law. Very few prison facilities survived the war and those that did are mainly staffed by demobilized soldiers and officers with little if any relevant training. Many people are held without due process or are incarcerated unnecessarily, exacerbating prison overcrowding.

UNODC, in partnership with the United Nations Mission in the Sudan and in cooperation with the International Centre for Criminal Law Reform and Criminal Justice Policy, is strengthening the capacity of the Southern Sudan Prison Service to institute reforms, meet international humanitarian standards and protect prisoners' human rights. Since 2007, UNODC has trained nearly 1,500 prison staff in areas such as leadership, policy and regulations, information management, and the treatment of prisoners with special needs, including women, children and the mentally ill. UNODC provides vocational skills training for prisoners so that people like Pastino can learn a trade that will help them find work after their release, and we are helping revive the probation system to reduce prison overcrowding. UNODC also supports efforts to ensure more frequent review of criminal cases so that innocent people like Pastino do not remain unjustly incarcerated.