UNODC to launch report on the globalization of crime 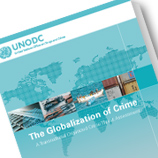 14 June 2010 - UNODC will launch a report entitled The Globalization of Crime: A Transnational Organized Crime Threat Assessment in New York on Thursday, 17 June. This threat assessment of transnational organized crime looks at major trafficking flows, including of drugs (cocaine and heroin), firearms, people (for sex or forced labour), natural resources and counterfeit products, as well as maritime piracy and cybercrime.

"The report shows that illicit trade involves all major nations: the G8 and the BRIC countries (the fastest growing and largest emerging markets economies of Brazil, Russia, India and China) alike, as well as regional powers," says UNODC Executive Director Antonio Maria Costa. "It shows how the criminal market spans the planet, and has turned into a security threat," says the head of UNODC. The report features a number of high-impact illustrations of global illicit flows and their markets.

Work on the report was initiated following concerns expressed by Member States, the Security Council, the G8, and other international organizations about the threat posed by transnational organized crime, and the need to counteract it.

The launch will be hosted by the Council on Foreign Relations' programme on International Institutions and Global Governance. On the same day, there will be a General Assembly session on organized crime. The report will be available on the UNODC website on Thursday, 17 June.