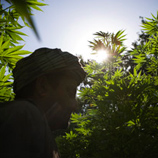 "While other countries have even larger cannabis cultivation, the astonishing yield of the Afghan cannabis crop (145kg/ha of hashish, the resin produced from cannabis, as compared to around 40 kg/ha in Morocco) makes Afghanistan the world's biggest producer of hashish, estimated at between 1,500 and 3,500 tons a year", said UNODC Executive Director Antonio Maria Costa.

The Survey is based on data from 1,634 villages in 20 provinces. It shows that there is large-scale cannabis plant cultivation in half (17 of 34) of Afghanistan's provinces.

The Survey shows that opium poppy is still favoured over cannabis plant among Afghan farmers: unlike opium poppy, cannabis plant has a short shelf life and grows in summer, when less water is available for irrigation. In the aggregate, the value of cannabis resin in Afghanistan was estimated at between US$ 39 million and US$ 94 million, about 10-20 per cent of the farm-gate value of opium (US $438 million in 2009).

At a press conference in Kabul, UNODC Representative in Afghanistan, Jean-Luc Lemahieu, said "Alternatives are essential. Yesterday farmers' gained income from illicit crops. Tomorrow we must move them to licit livelihoods. Today is the challenge. Development will not come in a day, you cannot serve asphalt for dinner on the family table".

Staffan de Mistura, Special Representative of the Secretary General in Afghanistan also at the Kabul press conference stressed: "When I meet with Afghans, they always mention two issues they are faced with: One is security, the other is corruption. The UN is here to assist the government so that corruption is also tackled with the proper methods. It is in the interest of the international community as well as the Afghans. If corruption is not tackled, there is less incentive to give the ressources so much needed for development."

Profits from the drug trade fuel corruption. It is no surprise that the anti-corruption drive goes hand in hand with the counter narcotics campaign.