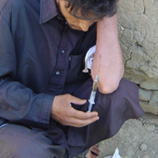 10 March 2010 - The rapidly growing HIV/AIDS epidemic in Eastern Europe, fuelled primarily by unsafe injecting drug use, will be a topic under the spotlight at the VIII International AIDS Conference (AIDS 2010), to be held in Vienna in July.

"To break the trajectory of the HIV epidemic in Eastern Europe, we must stop new infections among injecting drug users and their partners," said UNAIDS Executive Director Michel Sidibé at a press conference held today to discuss AIDS 2010. "People using drugs have a right to access the best possible options for prevention, care and treatment."

"We can and must reverse the HIV epidemic, first of all by preventing the spread of drug use, and then by providing treatment to addicts. In this comprehensive programme, HIV-targeted measures include providing clean injecting equipment, opioid substitution and antiretroviral therapy," said UNODC Executive Director Antonio Maria Costa.

The United Nations, through the Joint United Nations Programme on HIV/AIDS (UNAIDS) and UNODC, is supporting the AIDS 2010 conference, to be held from 18 to 23 July 2010, which is organized by the International AIDS Society, a non-governmental organization. 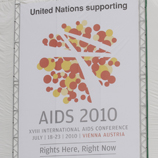 At the conference, participants will also examine worldwide progress towards the 2010 deadline set by world leaders in the Millennium Development Goals for achieving universal access to services for the treatment of HIV/AIDS and HIV prevention.

Around 25,000 people working in the field of HIV, including policymakers, legislators, researchers, people living with HIV and others committed to ending the pandemic, will attend the conference, whose theme, Rights Here, Right Now, emphasizes the central importance of human rights in responding to HIV.

By holding the conference in Vienna, the organizers will highlight the situation in Eastern Europe and Central Asia, regions experiencing a fast growing epidemic largely through unsafe injecting drug use. An estimated 1.5 million people are living with HIV in these regions. Sharing needles and injection equipment is thought to be three times more likely to transmit HIV than sexual intercourse. 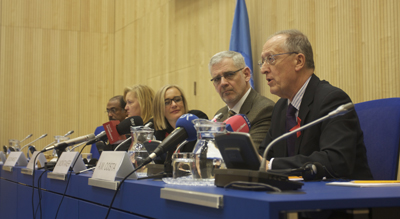 UNODC is the lead agency within UNAIDS for HIV prevention, treatment, care and support for injecting drug users and in prison settings. It works in 55 priority countries in Africa, Eastern Europe and Central Asia, South and South-East Asia, Latin America and the Caribbean, helping countries to provide drug users, prisoners and people vulnerable to human trafficking with comprehensive evidence-informed HIV services.

Facts about drug use and the spread of HIV