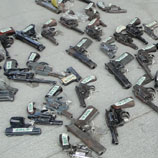 23 March 2010 - On 19 March, the Security Council discussed the impact of trafficking in small arms and light weapons, particularly in Central Africa.

In his address, UNODC Executive Director Antonio Maria Costa warned that "in troublesome hands, even small amounts of arms can undermine the socioeconomic progress of a nation; break the State's monopoly on the use of force; or create a tipping point in political (or military) stalemates". He said that the market for illicit arms is  estimated globally at US$ 200-300 million per year, which is about 20 per cent of the (licit and measurable) arms trade. Africa, the arms smugglers' most profitable market, suffers the largest number of casualties because of it.

In the meeting, presided over by Gabon, Mr. Costa pointed out that "small arms, unlike drugs or counterfeits, are a durable product. An AK-47 can last indefinitely, it just needs ammunition. As a result, arms trafficking tends to be episodic, rather than a permanent flow, with a predictable pattern: from countries with large stockpiles to a region descending, or pushed, into crisis (in the third world)."

He cited corruption as a key enabling factor in the arms trade. "Although some arms are smuggled across borders (for example, between the US and Mexico), most weapons are just shipped through commercial channels, relying on fraudulent papers and corrupt officials", he said.

As he pointed out in his speech, corruption in the source country (known as "point of departure diversion"), enables traffickers to use fake end-user certificates for legal exports. Corruption at the "official" destination enables a legal shipment to be diverted to a different location ("post-delivery onward diversion"):  the tanks, weapons and ammunition on a Ukrainian ship hijacked by Somali pirates (in September 2008) were intended for South Sudan, not Kenya, as the papers said.

At the true destination, in countries for example in the Sahel, Central, East and West Africa, weapons are bartered for drugs and natural resources (oil, precious stones, metals and timber). "As a result, arms trafficking and organized crime fuel conflicts and vice versa", said Mr. Costa.

He urged States "to promote development and security, so as to reduce the demand for arms. To reduce the supply, more must be done to improve the safekeeping and destruction of stockpiles - not least within the OSCE area."

Mr. Costa highlighted the fact that the United Nations already had the Protocol against the Illicit Manufacturing of and Trafficking in Firearms, Their Parts and Ammunition, supplementing the United Nations Convention against Organized Crime, which entered into force in July 2005. Parties to the Protocol are required to adopt legislation to prevent guns from falling into the wrong hands; criminalize the removal of the markings on guns; keep the records necessary to trace them; prevent the re-activation of disabled guns; promote cooperative regimes to monitor gun flows; prevent weapons theft; and build law enforcement capacity across borders.

And yet, as the head of UNODC pointed out, there are only 79 parties to this Protocol. "To cut the illicit flow of weapons, I urge you to use the Firearms Protocol to: (1) close loopholes in national legislation; (2) tighten up regulations of air/sea transport of weapons; (3) develop regional databases on seizures;  (4) promote inter-agency cooperation between customs, civil aviation, port and export licensing authorities; (5) profile suspicious shipments; and (6) share information with countries to verify compliance with international agreements", said Mr. Costa. He also urged Member States to follow the money trail of arms deals to seize the proceeds of crime.