Access to HIV services is a right for drug users 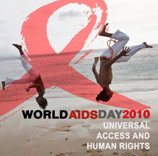 1 December 2010 - An estimated 16 million people across the world inject drugs, with over two-fifths, or around 3 million people, of these living with HIV. In countries where comprehensive models for the delivery of HIV services have been adopted, and where communities have been enabled to provide evidence-informed and human rights-based HIV services on a larger scale, remarkable results have been achieved in decreasing the number of newly diagnosed HIV infections.

Evidence shows that people who use drugs are willing to protect themselves, their sexual partners and their societies. Providing comprehensive services and outreach to people who inject drugs - and to their injecting or sexual partners - can effectively prevent HIV transmission. The sooner HIV prevention programs are implemented, the more effective such responses will be.

With World AIDS Day 2010 being recognized on 1 December, this is a particularly relevant issue for UNODC particularly keeping in mind the recently adopted UNAIDS (the Joint United Nations Programme on HIV/AIDS) vision statement: 'Zero new HIV infections. Zero AIDS related deaths. Zero discrimination.' Speaking on World AIDS Day 2010, UNODC Executive Director Yury Fedotov noted: "As one of the ten cosponsors of UNAIDS, this vision gives UNODC a clear directive to our work: to strive for zero new HIV infections among drug users and in closed settings, including prisons."

Although considerable progress has been made in the global HIV response over the past two decades, coverage of the most effective HIV interventions for men and women who inject drugs across the world remains low, at only 8% of injecting drug users on opioid substitution therapy and 4% on HIV treatment.

Access to HIV services is often impeded by factors including poor availability, accessibility and quality of services, restrictive inclusion criteria, lack of gender-responsiveness, high costs of services, compulsory or ineffective drug dependence treatment approaches, stigmatization, and a lack of confidentiality and protection of personal information.

In many countries, legislation and practices continue to result in widespread discrimination towards people who use drugs. Drug users remain socially marginalized, subjected to violations of human rights, and incarcerated in large numbers or confined to detention centers. This undermines effective HIV responses as it stops users from accessing services and makes prevention of new HIV infections difficult.

As explained by Mr. Fedotov, UNODC works to promote an integrated response to the HIV epidemic among drug users, including prevention of drug use, treatment of drug dependence and measures to protect health: "A well-coordinated network of services for drug-dependence treatment, HIV prevention measures, AIDS treatment interventions and social protection will succeed in stopping HIV."

Full Statement from UNODC Executive Director, Yury Fedotov on the ocassion of the World AIDS Day 2010

UNODC on HIV and AIDS