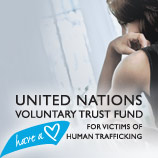 3 November 2010 - Celebrated humanitarians and actors Demi Moore and Ashton Kutcher will join Secretary-General Ban Ki-moon tomorrow in New York to lead the launch of the United Nations Voluntary Trust Fund for Victims of Trafficking in Persons.

Joining them will be the President of the General Assembly at its sixty-fifth session Joseph Deiss, UNODC Executive Director Yury Fedotov and New York Times Pulitzer Prize winning author and journalist Nicholas Kristof, among others. Also attending will be civil society leaders who have championed trafficking victims' rights, as well as experts from academia and law enforcement, private sector supporters of the cause, and survivors of modern-day slavery.

The Fund was established following the adoption by the General Assembly in July 2010 of the United Nations Global Plan of Action to Combat Trafficking in Persons, in which Governments are urged to take coordinated, comprehensive and consistent steps to combat such trafficking and to adopt a human rights-based approach.

The Fund will help Governments, as well as intergovernmental and non-governmental organizations, to protect and support victims of human trafficking so that they can recover from their physical and psychological scars. UNODC has been designated to administer the Fund, with the advice of a Board of Trustees appointed by the Secretary-General.

Ms. Moore and Mr. Kutcher have demonstrated a strong commitment to the fight against human trafficking. They created "DNA", the Demi and Ashton Foundation, which aims to raise awareness about child sex slavery worldwide, change the cultural stereotypes about the issue and rehabilitate victims.

UNODC invites all Governments, foundations, and the private sector to generously pledge contributions to the Fund. The launch of the Fund will be open to press and leaders from the private sector, non-governmental organizations, academia, foundations and arts communities, with advance registration.

The event will be webcast on 4 November at 3 p.m., New York time.