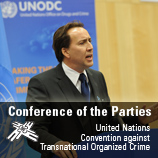 A dedicated humanitarian and philanthropist, Mr. Cage told Governments gathered in Vienna this week to discuss the United Nations Convention against Transnational Organized Crime that he would redouble his efforts to help heal blighted lives.

In a moving testimony, he described some of their ordeals: "I met a young girl who had been the sex slave of a rebel leader and bore his child. I met a boy who was forced to kill his own sister. Yet I was also amazed by these children, and deeply humbled. So many of the children I met displayed incredible strength and resilience, and an almost incomprehensible capacity for forgiveness, of both themselves and others".

In recognition of the star's commitment, Yury Fedotov, UNODC Executive Director said: "He established a fund to help former child soldiers, providing vital support for on-the-ground rehabilitation shelters and medical and psychological services. He has also supported efforts to promote international arms control and to rebuild New Orleans in the aftermath of Hurricane Katrina".

Last year, Mr. Cage travelled with UNODC to Uganda and Kenya to meet child soldiers and victims of other forms of human trafficking.  He had been moved by 15-year-old Rashad, who was serving a 10-year prison sentence for piracy in Kenya.

"In prison at 15. I'm sure many of you are parents, and some of you may even have a 15-year-old son. If you do, what is your son's life like?" he asked. "Now think about Rashad, who has no parents, condemned to a decade behind bars".

"Thanks to support from UNODC, conditions at Shimo Le Tewa prison are quite good. But Rashad is still a child in prison," he said.

Paying tribute to the "real-life heroes" toiling behind the scenes, Mr. Cage said: "I've seen the brave souls working on the front lines, operating under the most difficult circumstances and with very limited resources, to help victims of organized crime.They are ordinary people. Yet they are also extraordinary."

Mr. Cage has starred in some 65 major motion pictures. He has won an Oscar for Best Actor for Leaving Las Vegas and was later nominated for his dual performances in Adaptation. He is the recipient of a Golden Globe Award, two MTV Movie Awards and a Screen Actors Guild Award, among others, as well as having a star on the Hollywood Walk of Fame.

Mr. Cage has already worked closely with UNODC. In May 2009, he launched "Welcome to Gulu", a benefit exhibition at United Nations Headquarters in New York, featuring paintings by former Ugandan child soldiers and abducted girls.

"Throughout my career as an actor I've played many parts: heroes and villains, lovers and losers, and yes, both criminals and crime-fighters. But Goodwill Ambassador for Global Justice for the UN Office on Drugs and Crime is certainly my most challenging and meaningful role," said the Hollywood personality.

Agenda of the fifth session of the Conference of the Parties

Webcast of the fifth session of the Conference of the Parties