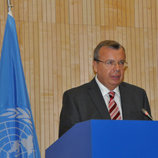 13 September - Yury Fedotov, the new Executive Director of UNODC, spelled out the initial priorities for his Office upon assuming duties today. Formerly Deputy Foreign Minister of the Russian Federation, Mr. Fedotov is also Director-General of the United Nations Office at Vienna (UNOV), the third United Nations office after New York and Geneva.

"Clearly, in recent years there has been significant progress in expanding the UNODC range of action", said Mr. Fedotov.  "Today, Vienna and our field network is recognized as a key pillar in the United Nations family, dealing with a vast array of issues related to security and development", he added.

Among those issues, he highlighted that "Vienna is a major hub in bringing forward the reforms launched by the Secretary-General in adapting the United Nations to the global challenges of this century: from climate change to universal access to health, energy, food and water security; increased international and regional cooperation and coordination of space-related activities for development and welfare; the protection of individuals from being trafficked, abused and enslaved; the protection of citizens from unfair criminal justice systems; the protection of communities from misuse of power; and the protection of youth from drug addiction and HIV/AIDS" .

He wished to see UNODC "enhance further the political profile in line with the international instruments to deal with such global challenges as illicit drug trafficking, organized crime, corruption and terrorism". Its work is "central to assisting Member States in the formulation and implementation of policies", he said.

"I am looking forward to a period of consolidation, as we reinforce the Office's governance and financial mechanisms in order to keep up with the world's growing drugs and crime challenges", he said, referring to another major issue that he intended to address in close cooperation with Member States.

In order to enhance overall performance, he would promote key principles adopted by the United Nations, including transparency of action, accountability, geographical distribution and gender balance.

Appointed by Secretary-General Ban Ki-moon, Mr. Fedotov will place a strong emphasis on safeguarding health, human rights and justice in drugs and crime policy. "I want this Office to make a significant contribution to economic and social progress," he said.

An experienced diplomat, Mr. Fedotov has represented the Russian Federation at the main deliberative bodies of the United Nations in New York. He has also been posted to Algeria and India and served as a member of the College of Commissioners of the former United Nations Monitoring, Verification and Inspection Commission in Iraq.  His awards include the Order of Friendship, several medals and a Certificate of Appreciation awarded by the President of the Russian Federation.

"I have chosen him because of his strong commitment to the United Nations cause, his credentials, expertise and experience", said Mr. Ban.

Address to all UNODC and UNOV Staff - Speech by Mr. Fedotov