G20 can mobilize private sector in global fight against corruption 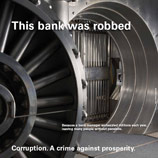 27 April 2011 - UNODC Executive Director Yury Fedotov has called on public and private businesses to put in place urgent concrete measures to stem the tide of corruption. "As recent events in North Africa and the Middle East have demonstrated, corruption has the power to shake the very foundations of society. Even in regions where peace and prosperity prevail, corruption takes a heavy toll", said Mr. Fedotov.

Addressing the conference ' Joining Forces against Corruption: G-20 Business and Government', organised by the French Presidency of the G-20 and the OECD, with the support of UNODC, Mr. Fedotov said it is time for the G-20 to turn anti-corruption commitments into action: "The international community is grateful for the private sector's support for the United Nations Convention against Corruption. But now it's time for business to move beyond declarations to concrete actions. The private sector can play a key role to enhance accountability and transparency and to strengthen the global economy".

The event in Paris follows upon the commitments taken by G-20 Leaders at the Seoul Summit in November 2010 where the G-20 adopted an Anti-Corruption Action Plan that recognizes the centrality of the United Nations Convention against Corruption. The Plan provides a common approach and an opportunity for the G-20 to lead by example in the global fight against corruption. It also recognizes that the private sector has an essential role to play.

Mr. Fedotov presented four concrete proposals on what the business community can do to eliminate corruption: adopt private sector anti-corruption policies aligned with the UN Convention against Corruption; establish a credible mechanism to review own commitments to integrity; invest in strengthening public integrity in developing countries and invest in keeping corruption out of business supply chains.

"In October this year, the Conference of States Parties to the Convention against Corruption will meet in Marrakech, Morocco to take stock of global progress in preventing corruption. I hope that the private sector will use the months leading up to the Conference to develop specific policies and concrete steps to fight corruption", said Mr. Fedotov.

The G-20, established in 1999, is a forum for international economic development that promotes open and constructive discussion between industrial and emerging-market countries on key issues related to global economic stability. It encourages public-private partnerships and offers a significant opportunity for developing and implementing initiatives that engage the private sector in the global fight against corruption.

Your No Counts - UNODC Anti-Corruption Campaign