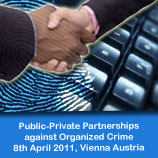 8 April 2011 - The trade in illicit goods, drugs and even people is big business. Its profits exceed those of even the largest multinational corporations. According to recent estimates, international organized crime - in all its manifestations - generates illicit profits that account for up to 5 per cent of the world's Gross Domestic Product.

Unlike the private sector, transnational organized crime is not constrained by national or international laws or regulations, and despite the existence of effective global anti-money-laundering tools, it appears that less than one per cent of the proceeds of crime laundered through the global financial system is intercepted and confiscated.

The Commission on Crime Prevention and Criminal Justice, at its nineteenth session in May 2010, requested UNODC to examine the efforts made by Member States to use public-private partnerships as a mechanism for combating transnational crime and to identify priority areas for the strengthening of such partnerships.

Consequently, UNODC organized a symposium, held today in Vienna, bringing together government officials and private sector experts from banking and financial institutions, international shipping companies and organizations working to tackle wildlife and forest crime and cybercrime. The experts shared best practices and discussed possible future initiatives under which public and private corporations could work together to tackle transnational crime, which, given the vast sums of money involved, can undermine legitimate economies, corrupt law enforcement and even "buy" State elections.

Speaking at the symposium, UNODC Executive Director Yury Fedotov said: "Globalization has changed the nature of organized crime. We need a comprehensive response that strengthens resistance to transnational organized crime at its points of origin, along trafficking routes and at its final destinations. This requires international cooperation between Member States as well as partnerships involving Governments, businesses, civil society and international organizations."

Mr. Fedotov added: "The private sector is subject to legal and regulatory measures to protect the public and foster competitive markets. But in the fight against transnational organized crime, the private sector also needs commercial self-regulation to help distinguish between licit and illicit commercial flows, and to prevent the criminal exploitation of private-sector activities. For example, efforts to prevent human trafficking and keep forced labour exploitation out of supply chains help stop this modern day slavery."

"Preventing transnational organized crime is good for business, but the most important beneficiaries are ordinary people. Your efforts can help to foster development and create stronger economies and safer communities, giving people new opportunities and hopes for the future. By working together, you can make a real difference in the lives of people all over the world", he said.

The outcome of the symposium will help to inform part of the debate in next week's twentieth session of the Commission on Crime Prevention and Criminal Justice, which will be held from 11 to 15 April 2011. The Commission is the central policy-making body within the United Nations system for crime prevention and criminal justice and is also the governing body for the work of UNODC in those areas. During this year's Commission session, ministers and officials of Member States will discuss progress in international efforts to address transnational organized crime, including emerging issues such as cybercrime. The Commission will devote a special session to the misuse of technology for the abuse and exploitation of children.

Report: The Globalization of Crime

Twentieth session of the Commission on Crime Prevention and Criminal Justice