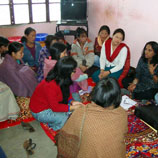 9 August 2011 - Twenty-two year old Chawngmawii from Mizoram state, in north-east India, left home when she was 16. Having suffered abuse while growing up, she started living on the streets and became addicted to injecting drugs. Chawngmawii turned to sex work to support her drug habit and was diagnosed with HIV in 2008. With the help of a local organization, Chawngmawii started visiting a centre that catered to injecting drug users, one of a number set up under the targeted intervention projects in the state and supported by the National AIDS Control Programme. Chawngmawii felt unwelcome, however, because the centre catered mostly to male clients.

Chawngmawii's story is similar to that of many other women like her in north-east India. Several states in the region are facing an HIV epidemic, driven by both injecting drug use and high-risk sexual behaviour. Despite the availability of free services for injecting drug users through both government hospitals and non-governmental organizations, a significant proportion of female users are unable to access treatment services for drug-driven HIV/AIDS. The lack of trained female service providers often deters women from seeking services, and the existing drop-in centres are primarily occupied by men.

UNODC is working with the Government of India to improve the quality and coverage of services for drug treatment. Under a joint United Nations programme in the north-eastern part of the country, UNODC works in the four states of Manipur, Nagaland, Mizoram and Meghalaya, focusing particularly on establishing HIV-prevention services for women. Under this initiative, interventions to address the special needs of women have been set up at four sites in the region.

The majority of the staff involved in the initiative are women, providing a comfortable environment for female drug users seeking help. In addition to existing drug use therapy, the project also addresses gender-specific requirements such as pre- and post-natal care, parenting support, anti-retroviral therapy, treatment for sexually transmitted infections and drug treatment services, including opioid substitution therapy.

Chawngmawii enrolled at the female drop-in centre in Aizwal, Mizoram, and has been visiting the drop-in centre every day since October 2010. "I go and rest, have a bath and eat, something which I could never do in the other centres, as there were too many men. It is a safe haven and I really feel at home." With a female doctor at the centre, Chawngmawii can get regular health checks and free medication.

The most striking outcome of the initiative has been its easy acceptance among female drug users and female partners of male drug users. Within six months, the programme has demonstrated encouraging results, as with similar UNODC initiatives in Bangladesh and Nepal.

This UNODC initiative has been possible thanks to support from AusAID for the Joint United Nations Programme on HIV/AIDS (UNAIDS) project in the four north-eastern states of India.