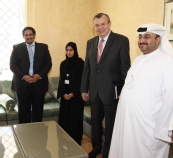 14 February 2011 - In view of the steady increase in the number of drug abusers in the Gulf region, especially among women and youth, authorities are having to invest in more efficient ways of offering services relating to prevention, treatment and awareness of drug abuse.

As part of a mission to the Gulf States, UNODC Executive Director Mr. Yury Fedotov visited the Centre in Abu Dhabi to witness at first hand the kind of services provided to clients and to explore possibilities for further collaboration with UNODC.

"Drug use is an emerging problem in this region, and we must all step up efforts to stem it. Drug use is a health problem. Drug users are affected by an illness - addiction - and they need to be offered treatment, care and social integration", said Mr. Fedotov.

He added that UNODC was committed to sharing its technical expertise with national bodies such as the rehabilitation centre in order to improve efficiency in prevention, treatment and rehabilitation activities.

The Centre is currently working with UNODC in order to increase its capacity to receive more patients, raise public awareness and develop efficient methods for collecting data on drug abuse nationwide.

"I thank the Government of the United Arab Emirates for its generous hospitality and contribution to the strategic partnership between UNODC and the United Arab Emirates. We look forward to cooperating further with the National Rehabilitation Centre on an Arab initiative on the protection of youth from drugs", added Mr. Fedotov.

The Centre has contributed to a collaborative programme with UNODC aimed at establishing the Centre as a resource centre for regional drug demand reduction, on the basis of a three-phase approach: (i) assessment of the current situation and needs and political positioning of the Centre as the leading centre for the drug demand reduction response in the United Arab Emirates; (ii) definition of the structure of the services to be offered; and (iii) expansion of the Centre to become a resource facility for the Middle East and North Africa, capable of training other centres, experts and/or practitioners in good practices in drug use prevention, treatment and rehabilitation.

The United Arab Emirates, in partnership with UNODC and the League of Arab States, participated in the development of a regional programme for the Arab States for the period 2011-2015, which was launched on 8 December 2010 with the participation of the League's Secretary-General. The programme focuses on crime prevention, drug control, criminal justice reform and counter-terrorism.