Mexico City Airport has a message for travellers: humans are not for sale 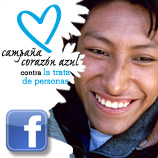 11 January 2011 - With more than 23 million travellers per year, Benito Juarez International Airport is Mexico's main international and domestic gateway, as well as Latin America's busiest hub for passenger traffic and aircraft movement. As such, it is a perfect venue for spreading messages to travellers on a crime that shames us all - that of human trafficking.

Recognizing the communications potential around this high-traffic hub, UNODC Mexico and airport authorities have begun broadcasting public service announcements on human trafficking across the vast number of television monitors located in two terminals of the airport.

This is a concrete result of the adoption of UNODC's Blue Heart campaign in Mexico by President Felipe Calderon in April 2010. Since its adoption, the national-led Blue Heart campaign has become Mexico's most important initiative against human trafficking with twenty eight federal entities, nine Mexican states, the Legislative Power, private enterprises and thousands of individuals joining the campaign.

Recently, the Mexico State Congress passed a resolution instructing all congressmen and congresswomen to wear the UNODC "Blue Heart" pin and post the Blue Heart banner on government websites.

"We are certainly touched and impressed by the positive response of our Mexican partners, and urge new stakeholders to support our efforts to continue expanding this flagship initiative", says Felipe De La Torre, UNODC Crime Prevention Expert and Blue Heart campaign coordinator in Mexico.

Another strategic partner from the private sector that has helped spread the word on human trafficking in Mexico is the multinational Microsoft, which displayed the Blue Heart banner link on the Microsoft MSN website in Mexico which attracts millions of viewers daily. In just three hours after the official online launch, hundreds of thousands of Internet users were informed about the acts, means and purposes of human trafficking - a key first step in tackling this crime. In 2011 this partnership with Microsoft is set to be strengthened with the incorporation of Blue Heart talks in national workshops that Microsoft will carry out in Mexico to help protect children from cybercrime.

"The Internet, in particular social networks, has become a virtual paradise for traffickers and pedophiles who seduce vulnerable children and teenagers for purposes of sexual exploitation," explains Mr. De La Torre. "We are especially satisfied with the involvement of companies such as Microsoft, whose broad channels will be used to educate our communities on the safe and responsible use of the Internet to prevent human trafficking and child pornography".

In August 2010, in an expression of solidarity with victims of human trafficking, nearly one thousand professional and amateur athletes took part in the eleven kilometer Blue Heart race in Mexico City's Chapultepec Park. Runners who made it to the finishing line were welcomed by UNODC and Federal Government staff who presented them with Blue Heart campaign materials.

In a bid to help victims of human trafficking, Secretary-General Ban Ki-moon in November 2010  launched the United Nations Voluntary Trust Fund for Victims of Trafficking in Persons. The Trust Fund is one of the most important elements of the new United Nations Global Plan of Action to Combat Trafficking in Persons, adopted by the General Assembly in July 2010. It will provide humanitarian, legal and financial aid to victims of human trafficking with the aim of increasing the number of victims who are rescued and supported, and broadening the extent of assistance they receive. UNODC will administer the Fund, with the advice of a Board of Trustees appointed by the UN Secretary-General, in accordance with the Financial Regulations and Rules of the United Nations and the relevant policies and procedures promulgated by the Secretary-General.