"Slavery was abolished once - it can be abolished again" 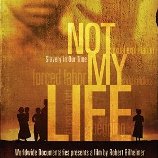 20 January 2010 - At any given time, some 2.4 million people are trapped in what is considered a modern form of slavery: human trafficking. Children, women and men across the globe are being sexually exploited and enslaved as forced labourers, victims of what is one of today's most heinous international crimes. A global enterprise worth an estimated $32 billion, human trafficking affects nearly every country in the world.

On 19 January, the feature-length documentary film "Not My Life" premiered in New York City. Centred around human trafficking in Africa, Asia, Europe and North and South America, Not My Life brings the story of this crime to the big screen; from victims and politicians to imprisoned traffickers, the film offers a unique and telling insight into a world to which so many have fallen prey.

The film, which is supported by UNODC and the United Nations Global Initiative to Fight Human Trafficking (UN.GIFT), brings a new level of exposure to the crime of human trafficking. As noted by UNODC Executive Director Yury Fedotov, "Not My Life presents a harrowing story of a world which far too many people are exposed to and trapped in. It is a world in which people's lives are torn apart and one which each and every one us needs to be aware of and work towards eradicating. Ruined lives, stolen childhoods, and people robbed of their dignity - we cannot allow traffickers to continue their pattern of destruction."

This was echoed by the film's Director, Oscar nominee Robert Bilheimer: "Not My Life probes the dark, hidden and often unspeakable realities of human trafficking and modern-day slavery - multi-billion-dollar global industries that earn their profits, as the film's narrative says, 'on the backs and in the beds of our planet's youth'".

In recent years, international momentum to eradicate this crime has been growing at all levels of society and, despite the fact that much remains to be done, public awareness is at an all-time high.

The Fund also provides people from all walks of life with a key opportunity to help victims of human trafficking directly: "The Trust Fund gives people the world over the opportunity to fight traffickers in a tangible way. Through contributions to the Fund we are able to assist victims and work harder to ensure that the scourge of human trafficking is rolled back. I implore everyone - from individuals to multinational corporations - to consider supporting the Trust Fund", said Mr. Fedotov.

With so many lives on the line, the need to end human trafficking has become more critical than ever before. As Not My Life points out, "Slavery was abolished once - it can be abolished again".

Not My Life trailer