"Tree of Hope" draws attention to plight of drug abusers 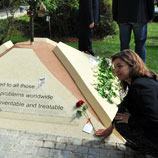 27 June 2011 - Each year, more than 200,000 people die of drug-related illnesses. On the occasion of the International Day against Drug Abuse and Illicit Trafficking on 26 June 2011, and in an effort to raise awareness and remember those affected by drugs, a "Tree of Hope" monument was unveiled outside the Vienna International Centre.

The "Tree of Hope", located prominently at the main entrance to the United Nations Office at Vienna, symbolizes a new beginning, new hope and confidence to prevent and treat drug dependence in the community. The tree serves as a reminder that with a firm and solid base drawing strength from families, schools, local communities and civil society, it is possible to prevent and treat drug dependence.

The idea of the "Tree of Hope" originated in Germany, when a mother whose child died of a drug overdose built a stone memorial in a public garden. The spirit of the original memorial is reflected in the monument's stone base, while the metal plant sprouting from the base symbolizes a new beginning full of hope.

In his message to mark World Drug Day, United Nations Secretary General Ban Ki-moon said: "Governments have a responsibility to counteract both drug trafficking and drug abuse, but communities can also make a major contribution. Families, schools, civil society and religious organizations can do their part to rid their communities of drugs. Businesses can help to provide legitimate livelihoods. The media can raise awareness about the dangers of narcotics."

Speaking on behalf of Austrian President Heinz Fischer at the unveiling ceremony, Rudolf Hundstorfer, Minister for Labour, Social Affairs and Consumer Protection of Austria, said: "Today we all know that drug addiction is treatable and that early diagnosis and timely prevention are the most important parameters in the fight against and the reduction of drug addiction. May this tree grow symbolically and give those affected by drugs, as well as their families, strength, courage and confidence to defeat this addiction."

Francis Maertens, Deputy Executive Director of UNODC, said that the "Tree of Hope" sent a message to communities everywhere that prevention begins not by stigmatizing drug abuse but by initiating dialogue and showing understanding.

Eveline Hejlek, vice-chairperson of the Vienna Committee on Drugs and representative of Zonta International, said: "Drug addiction must not be taboo, because it affects all social classes, all societies, all nations. We must all commit to assisting those who suffer from drug addiction and work to prevent drug abuse."