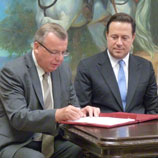 30 June 2011 - Mr. Yury Fedotov, Executive Director of UNODC, Juan Carlos Varela, Vice-President and Minister of Foreign Affairs of Panama and Abigail Benzadón Cohen, Executive Secretary of the National Council for Transparency against Corruption of Panama, have signed an agreement to establish a regional anti-corruption academy in Panama City.

The academy will offer specialized courses to equip prosecutors, judges, police officers and other public officials with skills in the prevention, detection and prosecution of corruption in public offices. The training curricula will cover such subjects as public procurement and transparency, whistle-blowing, preparation of legislative documents on corruption, participation in the mechanism for the review of implementation of the United Nations Convention against Corruption and asset recovery.

Speaking at the signing ceremony, UNODC Executive Director Mr. Yury Fedotov said: "I applaud this move by the Government of Panama to establish an anti-corruption academy for Panama and the region, which will serve as a training ground for public servants to fight corruption. Corruption undermines a government's ability to act and serve its people and siphons off financial resources intended to reduce poverty. As such, greater focus on improving the knowledge base and integrity of public servants is critical in the fight against corruption."

Mr. Fedotov added that the United Nations Convention against Corruption, which UNODC is mandated to promote, attaches great importance to the prevention of corruption in the public sector, and that joining efforts with the Government of Panama would enable UNODC to foster the implementation in Central America and the Caribbean of the crucial measures provided for in the Convention.

The Minister of Public Security of Panama, Jose Raul Mulino, and the Minister of Foreign Affairs of Colombia, María Ángela Holguín Cuéllar, were present at the signing ceremony as witnesses of honour. The regional initiative is being supported by UNODC through a $700,000 programme fully funded by the Government of Panama and is part of the UNODC Regional Programme for Central America. 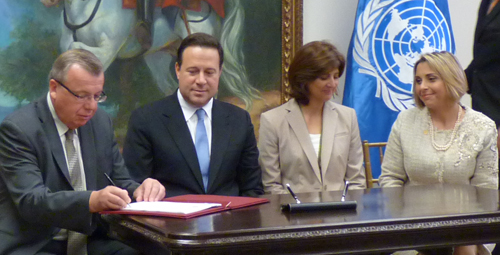 The anti-corruption academy, to be located at the Executive Secretariat of the National Council for Transparency against Corruption, will initially focus on training Panama's public officials before opening its courses progressively to Central American and Caribbean participants.

The academy will forge strategic alliances, inter alia, with the Organization of American States, the Central American Regional Integration System (SICA) and key universities, think tanks and training institutes in Panama and the region, and will forge cooperation with the International Anti-Corruption Academy (IACA). It will also actively seek partnerships with the private sector.

The Government of Panama will host the fifth session of the Conference of the State Parties to the United Nations Convention against Corruption in 2013. The Convention is the first legally binding global anti-corruption instrument. It obliges States to prevent and criminalize corruption, promote international cooperation, recover stolen assets and improve technical assistance and information exchange.