Designer drugs are escalating out of control, according to INCB 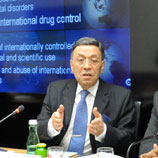 2 March 2011 - Designer drugs are being produced faster and in growing numbers, according to the annual report of the Vienna-based International Narcotics Control Board (INCB) for 2010, launched today in Vienna.

In Europe, 16 new designer drugs are being monitored, while in Japan the figure is 51. "Given the health risks posed by the abuse of designer drugs, we urge Governments to adopt national control measures to prevent the manufacture of, trafficking in and abuse of these substances," says Hamid Ghodse, President of the Board.

The report explores how corruption undermines the fight against drug trafficking and compromises the very authorities established to control and suppress such trafficking - police and justice officials often facing tremendous pressure from organized crime when working to prevent drug trafficking - and underscores the need to accord greater priority to the prevention of corruption.

According to a special supplement to the report, licit drugs needed for medical treatment are not readily available in all parts of the world. More than 80 per cent of the world's population has insufficient or no access to pain relief drugs and millions suffer unnecessary pain as a result. The Board urges Governments to take action, inter alia, to collect statistical data on licit drug requirements, adapt national legislation and improve education and training.

The report also provides a breakdown of drug production, trafficking and abuse patterns in the various regions of the world. Western Europe represents the world's largest market for heroin, approximately 60 per cent of regional consumption being accounted for by four countries in that subregion (France, Germany, Italy and the United Kingdom). The report indicates that cocaine trafficking through Africa to Europe, having decreased in 2008 and 2009, is now on the rise again, as evidenced by several large-scale seizures in 2010.

The International Narcotics Control Board (INCB) is an independent body responsible for monitoring implementation of the international drug control conventions. It was established in 1968 in accordance with the Single Convention on Narcotic Drugs of 1961. The annual reports of INCB, based on the Board's activities, provide a comprehensive review of the drug control situation in various parts of the world. As an impartial body, INCB tries to identify and predict dangerous trends and recommends measures to be taken in response to those trends.