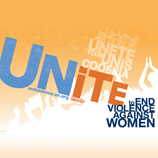 25 November 2011 - Today, the world marks the International Day for the Elimination of Violence Against Women. In his message to commemorate the Day, United Nations Secretary-General Ban Ki-moon said: "Violence against women and girls takes many forms and is widespread throughout the globe. Whether in developing or developed countries, the pervasiveness of this violence should shock us all. Violence - and in many cases the mere threat of it - is one of the most significant barriers to women's full equality."

As part of global efforts to contribute to the elimination of violence against women, UNODC recently released a  Global Study on Homicide which gives a gender breakdown of violent crime around the world. The report reveals that women of all ages are the victims of intimate partner and family-related violence in all regions and countries.

Available data for Europe in 2008, for example, show that just over half of all female victims of violent crime were murdered by family members (35 per cent by spouses or ex-spouses and 17 per cent by relatives), compared to 5 per cent of all male victims killed by spouses or ex-spouses and some 10 per cent by other family members. Beyond Europe, studies from Australia, Canada, Israel, South Africa and the United States show similar results, 40 to 70 per cent of female murders being linked to intimate partner- or family-related violence.

Angela Me, Chief of the UNODC Statistics and Surveys Section, said: "We hope that the Global Study on Homicide can, in its small way, contribute to a better understanding of violence against women, and that the data can help Member States to form preventive strategies."

UNODC is currently running the Blue Heart campaign, which raises awareness of the problem of human trafficking and aims to inspire decision-makers to effect change. According to UNODC, nearly 80 per cent of all victims of human trafficking are women and girls, many of whom also experience abuse and gender-based violence. Traffickers often use violence to intimidate and subdue the victims, and once recruited, the women usually find themselves in situations in which their freedoms are severely curtailed. They often suffer extreme physical and mental abuse, including through rape, imprisonment, forced abortions and physical brutality at the hands of their so-called "owners".

UNODC has launched the United Nations Voluntary Trust Fund for Victims of Trafficking in Persons, which is starting to disburse small grants to grass-roots non-governmental organizations working to provide humanitarian, legal and financial aid to victims of trafficking.

UNiTE to End Violence against Women