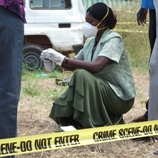 13 October 2011 - From the crime scene to the courtroom, forensic science services play a fundamental role in the criminal investigation and prosecution process. This is often restricted, however, to countries with the capacity and resources to develop a crime scene investigation (CSI) service and provide forensic expert training to their law enforcement officers.

Since the establishment of the Republic of South Sudan as the world's newest State in July, the restoration of internal security and law enforcement have been high on the agenda. In an effort to build and strengthen forensic awareness and basic crime scene investigation capacities in the country, the United Nations Office on Drugs and Crime (UNODC), alongside the police component of the United Nations Mission in South Sudan (UNMISS) and the United Nations Development Programme, recently concluded a course for 38 police officers on crime scene investigation and physical evidence awareness in the capital, Juba.

The course was aimed at "first responders" and other non-forensic personnel, such as law enforcement agents.  The participants learned that, through adherence to a key set of guiding principles - despite limited resources - crime scenes can be examined and the integrity of evidence secured. Visible or invisible fingerprints, footwear impressions, textile fibres, blood and any other biological material can all serve as "silent witnesses" to a crime. The careful and professional investigation of a crime scene by effectively recognizing, collecting and preserving all relevant items of physical evidence is key to securing impartial and reliable facts for the national criminal justice system.

Based on the UNODC manual on crime scene and physical evidence awareness for non-forensic personnel, the programme was taught in both Arabic and English by forensic experts from the Laboratory and Scientific Section óf UNODC and the police component of UNMISS.  Students received theoretical and practical instructions on identifying, preserving, photographing and documenting a crime scene, as well as on evidence recognition and recovery techniques, including fingerprint evidence.

During the training, several simulations of real-life crime scene investigation work were presented and discussed. This included highlighting the importance of crime scene security to ensure the integrity of potential physical evidence and the responsibilities of law enforcement agents when they first arrive at a crime scene.

By using elementary crime scene investigation kits, the participants learned how to collect a range of physical evidence. Particular attention was paid to the acquisition of techniques and tools required to recognize physical evidence and preserve it at a standard that ensures that the evidence can be used in court proceedings. The course culminated in a mock court, where students drew upon the knowledge gained during the course. Afterwards, many police officers noted the importance of transferring the skills they had learned to colleagues in their own districts as part of efforts to build a stronger crime scene investigation service in the country.