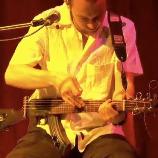 31 October 2011 - Eight years ago, Colombian musician César López witnessed the aftermath of a bloody terrorist attack outside a club in Bogotá. The violence and destruction, which cost 36 people their lives and injured 170, had a lasting effect on César, who since 2006 has been working with UNODC on a "No violence" campaign in Colombia and across the globe.

While taking in the devastation caused by the car bomb outside the Bogotá club, César - a musician and now social campaigner - observed that the way a nearby soldier held his rifle was similar to the playing position of a guitar. An idea formed and a few months later César had developed the first "escopetarra" - a guitar fashioned out of a decommissioned AK-47 rifle. César's creation, the name of which is drawn from the Spanish words for shotgun (escopeta) and guitar (guitarra), transforms what was once a weapon of violence into a symbol of peace.

In Colombia, César and other musicians have travelled to communities afflicted by violence to record video testimonials that are now shown at interactive concerts featuring music played on the escopetarra. César has also recently started travelling to villages in Colombia to offer support to communities that have resisted armed groups. The campaigners also play in prisons, schools and universities and work with young people, particularly those linked to gangs, in a bid to break the cycle of violence. In this way, the escopetarra has come to symbolize the path from destruction to peace.

César's response to the situation in his country has been to promote music as a healing force, turning people away from violence, and he has made a number of escopetarras from confiscated rifles provided by the Colombian authorities. Each instrument is donated to an international artist, institution or individual working for peace in order to help them to draw attention to the cause of ending violence and curbing the proliferation of small arms and light weapons. Among those to have received and played an escopetarra are Fito Páez and Miguel Botafogo (both from Argentina), Juanes (Colombia), Manu Chao (France), Bob Geldof (Ireland) and Eric Wainaina (Kenya). Two escopetarras were also donated to the United Nations - one is housed in the permanent exhibition on disarmament in New York and the other at the United Nations Office at Vienna.

As part of his international work, César travelled to India this week, where he presented an escopetarra to the Gandhi Smriti and Darshan Smriti organization in New Delhi. The organization disseminates the life story and messages of Mahatma Gandhi through various socio-educational and cultural programmes.

César will also be performing on Tuesday 1 November at a 'Music for Peace' concert at the Stein Auditorium, New Delhi, as part of the Delhi International Arts Festival 2011. Entry to the "César López - Music for Peace" concert is open to all; further information is available here.