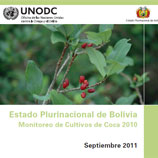 14 September 2011 - The 2010 coca survey for the Plurinational State of Bolivia showed no change in coca bush cultivation in the past year, 31,000 hectares (ha) being recorded as under cultivation. Overall, the country accounted for 20 per cent of cultivation in the region in 2010.

"This is encouraging news. Cultivation levels have fallen well below those of the 1990s and that trend looks set to continue," said Cesar Guedes, UNODC Representative in Bolivia. The annual survey is jointly produced by UNODC and the Government of Bolivia.

Looking at individual regions, the annual survey reports slight fluctuations, notably a decrease of 2 per cent in the region of Yungas de la Paz that was offset by an increase of 4 per cent in the Chapare region. Yungas alone was responsible for 66 per cent of cultivation nationwide. The Government stepped up eradication from 6,300 ha in 2009 to 8,200 ha in 2010.

However, coca leaf prices increased markedly - by 22 per cent in authorized markets and by 37 per cent in illegal markets. "We must observe this trend carefully", said Mr. Guedes. Seizures of coca leaf fell from 1,575 tons to 1,015 tons in 2010.

In 2010, the value of coca leaf production was $310 million, or 1.7 of the country's Gross National Product (GNP) and 12 per cent of the GNP of the agricultural sector.