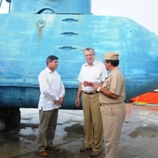 26 September - Yury Fedotov, Executive Director of UNODC, has witnessed the latest methods employed by the Colombian navy to control maritime smuggling. Ten years ago, Colombia was by far the world's leading producer of cocaine; since then, the quantity of cocaine produced in that country has decreased significantly. That success is due largely to the will and efforts of the Government and law enforcement bodies of Colombia to curb drug trafficking, including along nearly 3,000 kilometres of coastline - nearly half the combined length of the country's borders.

Colombia's Pacific coast has long been a smugglers' paradise. Speedboats, fishing vessels and semi-submersibles have traditionally been the primary means of transporting cocaine. However, with coastguards and the navy ever on the alert, traffickers must ensure that their shipments are not detected.

"The challenge is to stay one step ahead. As traffickers become bolder, craftier and acquire more sophisticated equipment, Colombia's law enforcement officers are doing an admirable job of holding back the tide of drugs," said Mr. Fedotov.

Drug traffickers have been building submarines to smuggle drugs and escape radar detection. The submarines are custom-made, ocean-going submersible vessels. The design and manufacturing techniques used to make them are constantly improving. Manned by a crew of four, they have enough cargo space for up to ten tons of cocaine and fuel tanks large enough for journeys of 3,200 km, and are even equipped with satellite navigation systems.

Mangrove-fringed coves and thousands of miles of waterways are perfect settings for clandestine shipyards. A Colombian navy commander told the Executive Director that the logistical capacity of criminals transporting heavy pieces of equipment was remarkable. The pieces are assembled under the cover of the jungle in camps outfitted with sleeping quarters for workers. The submarines can cost about $2 million and take more than a year to build.

The Colombian navy has increased cooperation with coastguards and law enforcement authorities in neighbouring countries, thus strengthening capacity for and the efficiency of interdiction activities. This has resulted in a higher number of drug seizures (164 tons were seized in 2010, compared to 44 tons seized in 2000).

"By their actions, Colombia's naval and coastguard officers are helping to keep drugs off our streets and to prevent them from harming consumers", said Mr. Fedotov.