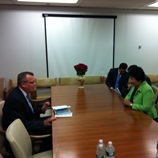 19 September 2011 - While attending the sixty-sixth session of the United Nations General Assembly, UNODC Executive Director Yury Fedotov today met with Roza Otunbayeva, President of the Kyrgyz Republic, to discuss that country's partnership with UNODC. The discussion focused on strategy, activities to counter contemporary challenges and threats and ways in which to strengthen the rule of law, peace and stability in Kyrgyzstan. Speaking on several issues falling under the UNODC mandate, the Executive Director referred to mutual legal assistance, border management, drug dependence treatment and human trafficking and also to the State Drug Control Service of Kyrgyzstan , of which UNODC is a key supporter.

The Office's support for that body, which has recently been reformed, is aimed at helping Kyrgyzstan to build capacity and increase its effectiveness in countering drug trafficking. Located close to Afghanistan, Kyrgyzstan has a key role to play in combating the movement of Afghan opiates to Europe, the Russian Federation and China. "UNODC firmly believes that the formation of this agency is critical in combating the interconnected ills of drug trafficking and organized crime," said Mr. Fedotov. "My Office is proud to be able to work with the Government in assisting the people of Kyrgyzstan and the wider region in reducing the threat of illicit drugs."

The discussion also covered the criminal justice work of UNODC in Kyrgyzstan. With the support of a European Union-funded project, UNODC is assisting in the implementation of a comprehensive prison reform programme in Kyrgyzstan with the aim of improving the quality of prisons in that country and helping the Government to implement reforms relating to the rule of law and criminal justice.