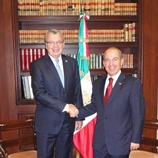 30 September 2011 - Speaking after a meeting with President of Mexico Felipe Calderón, UNODC Executive Director Yury Fedotov has highlighted the impact of organized crime on the region and increasingly on other parts of the world. "These criminals are responsible for the death and misery of people across the globe through their increasingly diversified illicit operations," said Mr. Fedotov "We have to remember, however, that such violent crimes form part of a much bigger, worldwide picture in which we face a complex and shifting threat; we have to remember that while the crimes are often local, our solutions must be global."

The Executive Director's two-day visit follows recent recent discussions between UNODC and the Government of Mexico as the two move towards establishing a strategic alliance aimed at strengthening a regional consolidated response to organized crime in Central America. The meetings with President Calderón and a number of the country's senior leaders are aimed at discussing areas ranging from human trafficking and the smuggling of migrants to illicit drugs and corruption.

Reflecting on those who are often most affected by organized crime, Mr. Fedotov expressed his solidarity with the people of Mexico: "On too many occasions, it is the citizens who have become victims while attempting to pursue a peaceful existence." Recalling last month's abhorrent violence at a casino in Monterrey, the Executive Director pledged his Office's continued support to Mexico, a country whose location at the intersection between South and North America often renders it vulnerable to criminal groups working to undermine peace and security.

In addition to discussions with President Calderón, Mr. Fedotov's schedule includes meetings with several key decision makers working in the areas of safety, security and health in Mexico. Those officials included Ms. Patricia Espinoza, Secretary of State for Foreign Affairs; Ms. Marisela Morales, Attorney-General; Ms. Alejandra Sota, spokesperson for the President; Mr. Genaro García Luna, Minister of Public Security; Mr. Mariano Francisco Saynez, Admiral and Secretary of the Navy; Mr. Salomon Chertorivsky Woldenberg, Minister of Health; Mr. Salvador Vega Casillas, Minister of Public Management; and Mr. Francisco Blake, Minister of the Interior. The visit will also include the inauguration of the centre of excellence for crime statistics on governance, victims of crime, public security and justice, which aims to improve data collection and to foster policy and research in those areas.

In advance of his trip to South America, which included a visit to Colombia, the Executive Director praised the efforts of Mexico in countering organized crime while warning the international community against viewing such crime as a localized problem and encouraging States to observe the principle of shared responsibility between supplier, source and consumer countries. Calling for heightened cooperation at the regional and global levels, Mr. Fedotov noted that "tackling organized crime and the criminals behind these networks without international collaboration is futile. If this is done without considering the wider region, we simply run the risk of having the crime networks relocate to a new country."

Organized criminals are responsible for the death and misery of people globally through their increasingly diversified illicit operations, including trafficking in drugs, persons and firearms, the smuggling of migrants, money-laundering and extortion. One commodity which is often favoured by criminals are human beings. In recognition of that fact, Mexico became the first country in the world to adopt the UNODC-led Blue Heart Campaign against Human Trafficking in April 2010. Eight of the country's states have now formally adopted the Campaign and in August 2011 the city of Querétaro, Mexico, adopted the campaign at the municipal level - another global first. Mexico is considered a model for the region, a role that is complemented by the country's strong political commitment to addressing the crime of trafficking in persons.

UNODC is also working with authorities and other United Nations agencies in Mexico to strengthen security and justice for journalists across nine of the country's states. Given that journalists are targets for criminal organizations and gangs, their protection and the promotion of a media system free of intimidation and violence is important.