UNODC in a new Egypt 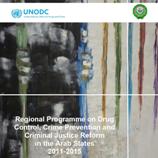 22 September 2011 - At the first meeting of its kind between UNODC and Egyptian authorities since the country's change of Government earlier this year, Executive Director Yury Fedotov and Egypt's Minister for Foreign Affairs, Mohamed K. Amr, met in New York yesterday.

The meeting is an important step in determining the future work of UNODC in assisting the country and the wider region in enhancing the rule of law and democratic security. Mr. Fedotov lauded the courage and resolve of the Egyptian people in bringing change and building a new society based on the principles of democracy and good governance. He also assured the Minister that the support of UNODC to Egypt is being increased in several areas, including in countering corruption and money-laundering, stolen asset recovery, criminal justice reform, human trafficking, forensic capacity-building, container control and terrorism prevention.

The UNODC Regional Office for the Middle East and North Africa, based in Cairo, has already been discussing joint priorities with key stakeholders and is in the process of developing a country programme for Egypt. The programme is aimed at maximizing the Office's work in the country and establishing strategic partnerships with other key United Nations agencies and donors.

One area in particular that Mr. Amr and Mr. Fedotov covered was human trafficking. Egypt has supported the anti-trafficking work of UNODC, both financially and in-kind, with recent examples including the country's involvement in the Working Group on Trafficking in Persons, cooperation with the United Nations Global Initiative to Fight Human Trafficking (UN.GIFT) and support for the United Nations Voluntary Trust for Victims of Human Trafficking. Mr. Fedotov called on Egypt to continue such support in tackling one of today's most shameful crimes, particularly in galvanizing support among the business community.

Speaking on regional and international issues, the Executive Director highlighted the Regional Programme on Drug Control, Crime Prevention and Criminal Justice Reform in the Arab States (2011-2015), which was launched in December. Responding to the dynamic situation and emerging priorities in the region, the programme is designed to keep abreast of changes and support Member States in tackling organized crime. With the ongoing developments in the region, shifting priorities and the demand for lasting reform, UNODC is working with Governments, civil society and other relevant players to identify priorities and action in this regard.

Regional Office for the Middle East and North Africa