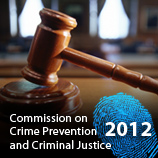 19 April 2012  - Transnational organized crime is a global threat and UNODC estimates that the proceeds of all crimes amounts to some US$2.1 trillion, or 3.6 per cent of GDP (2009).

International efforts to tackle this threat will be discussed during the upcoming Twenty-first session of the Commission on Crime Prevention and Criminal Justice, which takes place in Vienna from 23 to 27 April 2012.

There will be special discussions on preventing violence against migrants, migrant workers and their families; strengthening State oversight in civilian private security services;  countering maritime piracy; and the treatment of prisoners.

A number of side events will be held during the Commission, including a briefing on the Integrity Initial Public Offering; human trafficking in the context of tourism; the crime-terror nexus; the dignity and safety of migrants smuggled at sea; femicide; HIV prevention, treatment and care for prisoners; corruption surveys in the western Balkans; and countering firearms trafficking.

The 21st Session of the Commission will be chaired by Princess Bajrakitiyabha Mahidol of Thailand.