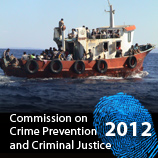 The text of the resolution contains strong condemnation of the continuing incidence of criminal acts against migrants, migrant workers and their families in all regions of the world, including criminal acts of violence motivated by racism, racial discrimination, xenophobia and related intolerance. In the resolution, Member States are requested to ensure the humane treatment of all migrants, regardless of their migration status, especially women and children, with full protection of their rights, and to take all appropriate measures with due regard for the safety and dignity of the person.

Profit-seeking criminals take advantage of people's desperation to migrate in order to make huge gains, often at the expense of the life and safety of migrants. As immigration channels become more limited, more people seek the assistance of smugglers, who take increasingly risky measures to circumvent border controls. Moreover, there are reports of both State and private vessels failing to rescue migrants in distress at sea, despite being in a position to do so. Migrants may also fall prey to traffickers, who deceive them to exploit them in a variety of ways with a view to maximizing their profit.

While the smuggling of migrants by sea accounts for only a small proportion of the total number of migrants smuggled worldwide, it accounts for the highest number of deaths among smuggled migrants. According to the 2011 Annual Report of the United Nations High Commissioner for Human Rights, reports suggest that more than 1,400 migrants may have perished in the crossing from Africa to Europe between January and August 2011.

As the guardian of the Trafficking in Persons Protocol and the Smuggling of Migrants Protocol, UNODC cooperates with stakeholders to assist States to reduce the prevalence of trafficking in persons and smuggling of migrants. Beyond ratification, States parties must implement these Protocols.

For instance, recently, UNODC, the International Organization for Migration and the European Agency for the Management of Operational Cooperation at the External Borders of the Member States of the European Union (Frontex) signed an agreement in which they pledged closer cooperation to tackle trafficking in persons and smuggling of migrants and to improve border management while protecting victims of trafficking in persons and upholding the rights of smuggled migrants.

In July 2012, UNODC will assume chairmanship of the Global Migration Group, a United Nations inter-agency group bringing together heads of agencies to promote the wider application of all relevant international and regional instruments and norms relating to migration, and to encourage the adoption of more coherent, comprehensive and better coordinated approaches to the issue of international migration.

The Commission recommended to the Economic and Social Council the approval of the draft resolution entitled "Promoting efforts to eliminate violence against migrants, migrant workers and their families" for adoption by the General Assembly.